Kate Moore writes about her new oratorio Sacred Environment, inspired by the Yengo National Park in New South Wales: ancestral lands of the Wonnarua and Darkinung people, and the area where Kate's own European ancestors first settled. Sacred Environment was premiered by the Netherlands Radio Philharmonic Orchestra and Choir on 24 June 2017 at the Concertgebouw concert hall in Amsterdam, as part of the Holland Festival, with visuals by Ruben van Leer. This work can be listened to the NPO Radio 4 website - go to Kate Moore's subpage and click the 'Luister werk' link next to the title Sacred Environment.

Sacred Environment is an oratorio venerating sacred land and the story it tells. It is the result of artistic research relating to the ancestral lands of Yengo National Park in New South Wales, Australia, the traditional territory of the Wonnarua and Darkinjung people. This land informed my libretto, the imagery and subject matter of the piece.

I wish to acknowledge the custodians of this land, the people of the Wonnarua and Darkinjung nations and their Elders past and present. I acknowledge and respect their continuing culture and the contribution they make to the life of this region.

The commission from the Holland Festival/ NTR for the Netherlands Radio Philharmonic Orchestra and Choir implied the genre of an oratorio, a non-staged setting of sacred or religious narrative. This resonated with me because I wanted to illustrate that nature itself is sacred. The oratorio is called Sacred Environment because I wanted to make a statement that the environment is as sacred as a Gothic Cathedral or any holy place of worship.

The inclusion of the didjeridu in the line-up for the commission was the key to unlocking a path of questions leading back to the bushland of my family heritage, the Aboriginal and colonial history of the area and the landscape and terrain in which they simultaneously existed. I chose the location because it is the place where my early European settler family, on my father's side, first became established and have lived in this region ever since. Originally the piece was going to be about the flora and fauna of the location but, upon visiting the location, I discovered that it was a holy place of worship in the Aboriginal tradition. 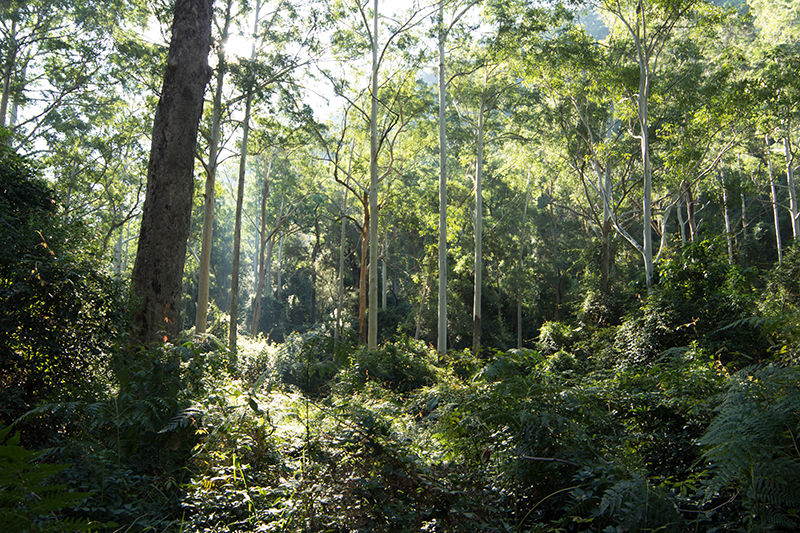 Curious about the path taken by my ancestors who settled in the lower Hunter Valley, I followed the Great North Road from Five Dock in Sydney to Newcastle, New South Wales. In May 2016, I took with me a team of three people, spending 10 days following the road into the bush, walking and observing the way in which all life in the forest is connected. We made a photographic journal of our observations and experiences. Each member of the team contributed a different perspective to the expedition and had a role to play in the development of the piece. The photographer Nina Frankova used her camera to capture intimate details and close-up interactions between plants, minerals, water and animals. The environmental scientist Marion Winkler gave names to the different plants and trees that we encountered, describing their complex ecosystems, and the didjeridu player Lies Beijerinck, taking her portable horn in her backpack, played the deep resonances of her instrument into the forest floor, allowing us to hear the shape of the valley.

The subject of playing and writing music for the didjeridu as white European women is a matter of contention - one that we respect. Traditionally women do not play the didjeridu as the instrument plays a crucial role in men's ceremony in some regions. We are also well aware of the issue of cultural appropriation. I do not include traditional songs, words or rhythms in the piece, respecting the sacred nature of their place within the ceremony of a tradition that extends over a period of 40,000 years. The use of the didjeridu in the piece helped me to understand this tradition on a deeper level, for which I am grateful.

The original North Road linked the settlements of Sydney and the farming communities north of the Hawkesbury River. Built by convicts, it is a ridgeway carved into sandstone following an ancient Aboriginal track. Although most of it has now been converted into modern roads, a portion, north of Wiseman's Ferry, remains intact: as it was when it was first built. It is World Heritage listed and surrounded on both sides by the breathtaking forests of Dharug and Yengo National Park. 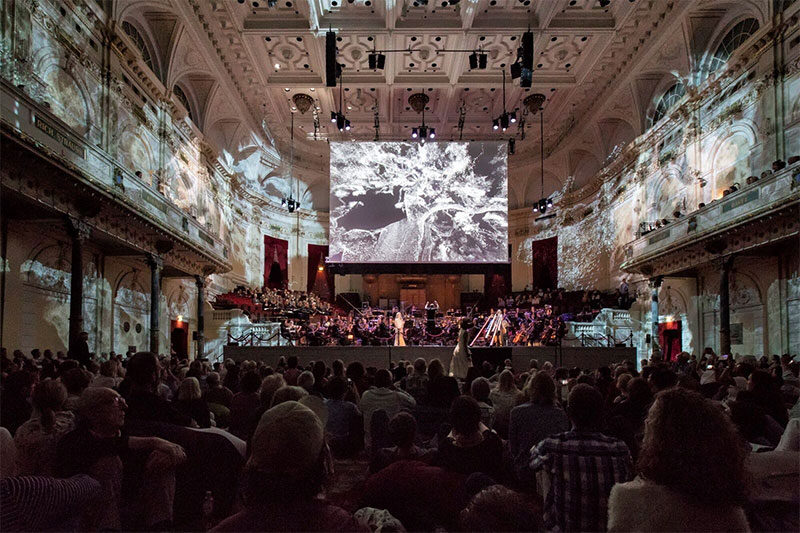 Bringing the Bush to the Concertgebouw on 24 June 2017.

The Concertgebouw represents the pinnacle of Dutch cultural society. I wanted to turn it into the bush: make the iconic European concert hall and the giant native tree trunks of the Australian bushland become one. The Concertgebouw is a historic building where guests travel from afar to watch and listen to the world's greatest musicians performing music by composers who have contributed to the Western, European canon. This reminded me of the Aboriginal concept of 'corroboree', a place where tribal men and women from Australia gather to sing, dance and celebrate their collective memory of Dreamtime stories, songlines and the law. I was curious about the intersection between nature and culture. I imagined bringing the bush into the Concertgebouw so that it would be no longer possible to tell where architecture ended and giant trees and branches began, blurring the lines between the two.

I recognise the importance of place and ancestral heritage to Aboriginal traditions and it is something that resonates with me. The Netherlands is the ancestral home of my mother's family and Australia is the ancestral home of my father's. My search for a cultural identity is tied to this journey. It is an obsession that has been sparked by my experience as a migrant, having been born in England and moving to Australia, and then moving from Australia to the Netherlands, being the daughter of a migrant Dutch family and an Australian family that reaches back to the very first European settlers. The feeling of being both new and old in a place simultaneously is something that I experience strongly in both Australia and the Netherlands.

The music is drawn from the sound of the bush. The piece is busting with cicada rhythms, frog sounds and birdsong. I wanted to recreate the breathless sensation I felt when confronted with the giant rock formations of the cliffs overlooking the river, the pyramid shapes of the mountains and stretches of bushland that reach beyond the horizon. One senses the spirit of the land, the earth energy, dreamlines, the path of the stars. There is a feeling of being within the bush and the bush being within oneself is created through the power of sound in which the intensity of the smell, light, heat and colour of the bush can be felt.

The libretto weaves a story of a woman lost in the bush, surrounded and overwhelmed by the elements. Lists of native trees, minerals, animals, stars and water in their Latin scientific names envelope her story - Latin names for these are employed so as to veil their true identity, keeping them hidden in plain sight and symbolising the inaccessibility of the bush to those who are not yet familiar with what it holds. To emphasise this, fragments of the Latin Requiem Mass including Libera me and Lacrimosa have been included, resonating with the ritualistic revelation concerning the past and future apocalypse of the fragile environment belonging to our ancestors and our children.

The story is told in four layers mirroring Aboriginal traditional storytelling, in which a story speaks on different levels depending on how far one has progressed in one's education and initiation. The meaning of traditional stories is itself sacred and can only be revealed to those who have been prepared and are ready to receive their real meaning. Although this story is in narrative form, it is told through a language of symbols. On one hand, is a simple story of a woman who has lost her way. She might be Mother Nature herself. The narrative outlines European versus Aboriginal spirituality and society and the concept of past, present and future, existing in one physical entity within the environment and the need to sustain the environment because it holds the treasure of our own existence. The environment is to be revered in all its beauty and complexity, an ecosystem likened to the most beautiful composition or the most complicated machine.