Dr Christopher Mark's new book Roger Smalley - a case study of 20th century composition (Ashgate 2012) approaches its topic through an interview with the composer and a critical commentary of his major works. Through Smalley's work, the book discusses broader issues relevant to a whole generation of composers.

Why Smalley? I have often been asked. He has not been regarded as a major figure outside Australia, and musicological careers (at least when it comes to the Western 'art-music' tradition) are generally built on 'rethinking' canonical composers or repertoires - the development of new aspects of established methodologies or the creation of new ones, often through importing ideas from cultural studies or philosophy (often when they're past their sell-by date in their discipline of origin - but that's a different blog). Even Roger himself asked me 'who else are you writing on? You can't just be writing about me'. In fact, I have been writing about others, but his music was my main focus for a long time. 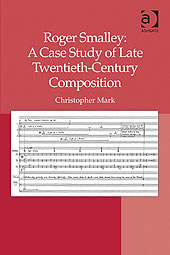 The answer is simply that I have always found his music emotionally engaging, first and foremost, and intellectually fascinating, and wanted to find out as much about it as I could. I'm pretty sure I must have heard the four-man ensemble he founded with Tim Souster in the late 1960s, Intermodulation, on BBC radio in the early '70s, when I was in my early teens and entertaining fantasies of being a composer myself. I certainly heard a BBC Radio 3 program on him after he had moved to Perth. He talked about the effect of his new environment on his music, and introduced some of his recent works, including Echo III for trumpet and tape-delay. But the works that had the biggest impact on me were the Konzertstück for solo violin and orchestra, written for the WASO in 1979-80, which I think has still had only three or so performances (the one I heard was the only British one, with Erich Gruenberg as soloist), and the Symphony, the 1982 Proms first performance of which I heard, again, on the BBC.

These works seemed somehow to combine the radical spirit of post-1945 progressivist music (the spirit of Boulez and Smalley's one-time teacher, Stockhausen) with a revivified lyricism. Above all, the music seemed excitingly new but (unlike so much of the music that originated in Darmstadt or American campuses) aurally comprehensible. Some critics called it new-Romanticism, and a decade or so later the term 'postmodern' would be applied to it, but it was really a different type of modernism, in which tonality (for there were clearly tonal centres) was, at it were, constructed anew from first principles.

It was, though, when I arrived in Australia myself in 1986 and picked up a copy of the score of the Concerto for Piano and Orchestra (to give it its proper title), published in facsimile by the AMC, that I began to take him on as a research project, giving a seminar on the Piano Concerto at Melbourne Uni. I wrote it up as the chapter that subsequently appeared in Poles Apart, a collection of articles by Roger himself and various others in celebration of his fiftieth birthday. I rather enjoyed myself with this, and a plan for a monograph was hatched.

It had occurred to me that Roger had engaged with a good deal of the various concerns of post-1945 composers, so that he would work well as a case study of the period, and this is what the book is - as well as acting as an introduction to his music from a critical perspective. (What it is not is a promo: Roger was adamant about this, but in any case he wouldn't have had any choice in the matter.)

The book took a long time to write. What people sometimes don't realise is that, in order even to make accurate, worthwhile general statements about composers, you have to know the music in detail. I felt I had to know the major works inside out, and this took a lot of poring over scores and sketches. I photocopied about a thousand pages of sketches at Roger's house during one fortnight's visit to him (a luxury compared with what is available to scholars of Beethoven or Machaut), and took copies of about twenty cassettes of recordings. By the time I started work on the book in earnest, I had returned to the UK, and it was there that we did the interview that forms the first chapter of the book.

As well as general descriptions, the book does, indeed, contain quite a lot of detailed commentary. Others will of course be the judge, but I've worked hard to make the book as readable as possible, and above all to offer explanations of how the music 'works' so readers can get more out of the music when they listen to it the next time (I'm not a fan of analyses that bear no relation to what can be heard). I've avoided non-standard technical jargon as much as I can, so that anyone who can read music should be able to follow what I have to say.

The book is about Roger's music - so there is nothing about his piano playing (including his staggeringly accurate sight-reading of the most complex pieces, which I've witnessed first hand), or his teaching, or anything other than the basics of his life. It may be the case that someone will write a biography in the future. The cut-off date is 2000, though in fact the Oboe Concerto of 1995-6 is the last work I write about in any detail. There have been few large-scale works since (Piano Concerto No. 2 is an exception), but there has been a handful of chamber works that are perhaps some of his finest - certainly Crepuscule and the Horn Trio come into that category. His illness means there probably won't be many more. This is a tragedy, not just for Australian music but music in general. Whether audiences for classical music are really dwindling or not, the tradition needs the kind of music that Roger writes - rooted in the familiar but constantly pursuing the new, eschewing easy options - for a vital future.

Christopher Mark is senior lecturer in musicology at the University of Surrey, UK, having previously taught at the University of Melbourne and the Australian Catholic University. He was founding editor-in-chief of the Cambridge University Press journal twentieth-century music, and has written numerous articles and book chapters on twentieth-century English composers. His second book on Britten, Britten: An Extraordinary Life (Associated Board of the Royal Schools of Music), is due to be published during the composer's centenary year in 2013.