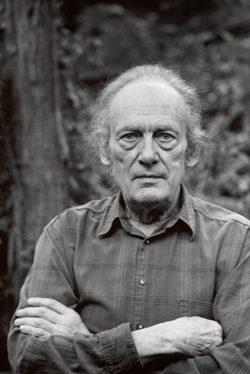 Composer Richard Meale (1932-2009) passed away in the early hours of 23 November 2009, at the age of 77. Meale was one of the most important composers of his generation, and his opera Voss is regarded by many as the most important Australian opera to date.

During his long career, Richard Meale created a significant output of works with a wide range of stylistic expression. His earlier works, including his Sonata for Flute (1960) and masterpieces such as Homage to Garcia Lorca (1964) and Very High Kings (1968), were composed according to the modernist ideals of the time - the latter two works also testify to his long-lasting love of Spain and Spanish art. Meale studied in the USA (University of California, LA) in the early 1960s, and, after his return, assumed an active role in promoting modernist music in Australia, not just in the form of his own compositions but also as a commentator, conductor, pianist and a teacher of composition in Adelaide.

Meale's name was also becoming well-known internationally, through the inclusion of his works at ISCM World Music Days, Warsaw Autumn festival, and the Paris Rostrum. It was perhaps all the more surprising for his contemporaries, then, when during the period leading to his opera Voss (1985), Meale abandoned modernist ideals and continued to write in a predominantly tonal idiom for the rest of his career. His reflection on his stylistic development in a 2002 radio interview is telling, as it contains something of both the composer's frankness and his magnanimity:

'I found that I could not express certain things in the atonal idiom. I could not express genuine tenderness, affection, various other things. I thought there is something wrong with an art form that limits. It was then I began to have suspicion. I'm quite content, however, to say, look, it no longer suited me.'

Richard Meale's funeral will be held on Friday 27th November at 1.15pm at the Northern Chapel, Northern Suburbs Crematorium