Of the few languages I can speak, I feel absolutely the most fluent in Music. I cannot remember ever not ’speaking' it and I still feel the child-like excitement of visiting that special place Music takes you to, every time I compose. 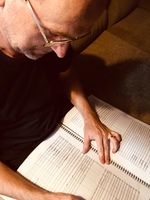 Marián Budos (b.1968, Slovakia), nominated for the 2022 Art Music Awards, has enjoyed a varied career as a composer, classical guitarist, conductor and pedagogue, preceded by an earlier successful international career as a champion 1500m runner for the Czecho-Slovakian national team. In 1991, Budos graduated from Matej Bel University with a Bachelor of Education, settling in Australia the following year. In 1995, Budos continued his studies in composition at the Australian National University with Jim Cotter. Budos heads the Music Department at Narrabundah College in Canberra.

Budos's compositional style is driven by structure, direction, and narrative. His strong harmonic, melodic and rhythmical development is underscored by an unorthodox use of instrumentation and orchestration, based on a mixture of Western and non-Western musical traditions. He has received many awards, the most prestigious being the 1998 SOZA Composer of the Year Award (Slovakia's highest music award) for his work Two Worlds, for classical and semi-acoustic guitars, which was televised nationally and later released on an album of the same title. Compositions from this album formed the repertoire of two tours performed in trio with Ivana Troselj and Ján Labant; a 1997 tour of Slovakia organised by the government arts agency Slovkoncert; as well as a 1999 Australian tour.

Budos enjoys collaborating on a diverse range of artistic projects. His arrangements of traditional Slovakian folk songs were featured at concerts for the Sydney 2000 Olympic Games celebrations in Canberra and at numerous cultural and diplomatic events. In 2002, conductor Oliver Dohnanyi premiered and recorded three guitar concertos by Budos with soloists Ján Labant, Rémi Boucher, Peter Remeník; along with the Slovak Sinfonietta, and Archi di Slovakia; later released on the album Heart on a Sleeve. Music from this album has also been used for film and television (A Touch of Courage: The Enlightenment; The Boe Sisters), and repeatedly featured on the US-based Classical Guitar Alive! show broadcast across over 300 radio stations in the Americas, Europe and Africa. Heart on a Sleeve and Secret Wedding were further performed at concerts in Poland and Slovakia, by Filharmonia Czestochowa, Lublin Philharmonics, and Archi di Slovakia.

Budos enjoys working on projects with an element of storytelling. In 2005, he co-composed music with Ivana Troselj for the popularly received European tour of Seasons of the Soul, a sacred song-cycle and concerto, conducting cellist Monika Leskovar, mezzo-soprano Ivana Troselj, guitarist Ján Labant, vocal group Close Harmony Friends, and the Slovak Chamber Orchestra of Bohdan Warchal. Then in 2010 he toured the Once Upon a Time children's fairy-tale concert with cellist David Pereira, harpist Alice Giles, saxophonist Niels Rosendahl, co-composer/vocalist Ivana Troselj, and puppeteers Cathie Roach and Cathy Petocz.

Budos enjoys a busy schedule of composing: In 2013 he premiered two works for the Centenary of Canberra: Clepsydra (Water Clock), performed by Swedish quartet The Peärls Before Swïne Experience with the Griffyn Ensemble at Belconnen Arts Centre; and My Canberra (Symphony No.2) - performed and recorded at Llewellyn Hall, featuring Canberra Youth Orchestra conducted by Rowan Harvey-Martin. Home from Two Worlds (also 2013), was arranged for Sally Walker (flute) and Phillip Mayers (piano), and released on the album Hemisphere through Chartreuse label.

Budos's Linn Linnaeus and The Magic Lute featured on John Couch's disc Ask Me Tomorrow, and have been broadcast repeatedly on ABC Classic since December 2015. Light (2015) premiered at the Australian Institute of Sport Arena; One Last Time (2016) and Last Train From Platform 49 (2018), premiered at Cithara Aediculae festival by Ján Labant; Tres Meditacions (homenatge a Antoni Gaudi), premiered by John Couch in Adelaide (2019) and featured on his album Whenua o te Manu; and A New York Minute, written for cellist Laura Metcalf and guitarist Rupert Boyd was premiered in Canberra and performed on their 2019 tour of Australia and repeatedly in the USA (2020-present), including a performance at the The Metropolitan Museum of Art, New York (2021). The piece is featured on Sono Luminus album Songs of Love and Despair.

The Passing of a Black Star (Homage to David Bowie), commissioned by the New Zealand Guitar Quartet, was premiered in Wellington in 2016, followed by the quartet's tour of China (2016), New Zealand (2017) and Australia, Mexico and USA in 2018. The piece has been broadcast repeatedly on Radio New Zealand and ABC Classic. The Perth Guitar Quartet opened the Perth International Guitar Festival in September 2018 with the work. In 2020, Budos premiered solo guitar works Nostalgia II, Six Personalities, and A Little Rock Suite, as well as Liminal Moments for flute and guitar, in duet with Jane Rayner.

Budos is also a strong supporter of community arts and music education. He served as the President of Canberra Youth Music Council from 2012 to 2014 in its transitional period of merging with Music for Everyone. For this work, he was given an honorary life-time membership of the newly formed government-funded organisation Music for Canberra, in 2015.

More recently, Budos has developed his love of books and literature into concerto projects. During his 2018 Barcelona visit, he was granted permission by acclaimed Catalonian novelist Jaume Cabré to adapt his international bestseller Jo Confesso (Confessions) to music. The premiere of this new work, Adrià's Confessions, a book-concerto for guitar and orchestra, featuring soloist Jacob Cordover, and supported by the ACT Government, Australian Embassy in Madrid, and the Australian Music Centre, took place in Barcelona's iconic Palau de la Música, on 21 April 2021. The piece has been nominated for the 2022 Art Music Awards. Budos has also received permission from Affirm Press Melbourne and Australian author Pip Williams to set her novel, The Dictionary of Lost Words, to music. This new book-concerto for harp and orchestra (Esme's Words) featuring harpist Alice Giles, is to be premiered in Australia in 2023.