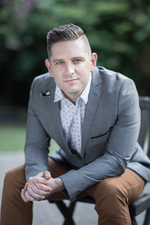 Several recent works by Gordon Hamilton subvert expectations of the orchestra. He conducted his 2015 beatbox concerto Thum Prints at the 2016 BBC Proms with beatbox superstar Tom Thum. His 2014 work for QSO Ghosts in the Orchestra places a choir among the orchestral players, prompting them with sung instructions. He also collaborated with turntablist Sampology on Natural Selections for orchestra and turntables.

He has also experimented with music for laptop and orchestra. In his 482 Variations on a Very Short Theme a brief Beatles recording plays out of a speaker... the orchestra latches onto three notes, spinning them out into 482 (extremely short!) micro variations. In Action Hero (commissioned by WDR Funkhausorchester) an Arnold Schwarzenegger speech plays through a speaker while the orchestra plays along.

Having freelanced for five years in Germany, Gordon was appointed as Artistic Director of The Australian Voices in 2009. Of their 2013 concert in New York City, The New York Times wrote "... it was as if the gates of heaven had opened." They have released albums with Warner Classics (2013) and ABC Classics (2016) as well as a songbook with Edition Peters (2013). Gordon's choral opera MOON (2011) toured Australia, Germany and to the Edinburgh Fringe and was named by The Herald (Scotland) as "one of the outstanding musical surprises of Fringe 2012." Their absurd concert Boombox toured New York City in 2015 and was labelled by Stage Whispers as "a dimension of its own, with... colourful stagecraft, personality and... magic."

In 2017 Gordon will conduct the WDR Funkhausorchester (Cologne) and the St. Christofer Chamber Orchestra (Vilnius). He is the Assistant Conductor of the Queensland Symphony Orchestra.

Under a more cheeky guise, Gordon reassembles the contributions of unwitting collaborators. His Toy Story 3 = Awesome! (2011) - lauded by The Sydney Morning Herald as "one of the coolest/nerdiest/funniest music videos doing the cyber rounds" - sets a stream of inane consciousness as spat out by his own Facebook news feed. His choral setting of a BuzzFeed article The 9 Cutest Things That Ever Happened (2013) has been viewed on YouTube over one million times.

Gordon is creative sound designer and radio producer, having produced recordings for ABC of the Royal Concertgebouw Orchestra and London Symphony. Gordon presents Screen Sounds on ABC Classic FM. In 2015 and 2016 Gordon sound-designed the RiverFire fireworks for the Brisbane Festival. He has composed for several plays at Queensland Theatre and La Boite Theatre Company including Medea (2015), in which a 'Greek' chorus sings and interacts with the actors.

Gordon received first prize in the Coral Gables Congregational Church Florida 2006 Composition Prize, as well as awards at the International Chamber Days, Raumberg (2008) and the Luxembourg Sinfonietta Composition Prize (2007). For his work with hearing-impaired children he was presented with a Community Champion Award (2011) by former PM Kevin Rudd.

Originally from Newcastle, Gordon studied at the University of Newcastle (2000-4) under esteemed composer Nigel Butterley. He is a represented composer at the Australian Music Centre.