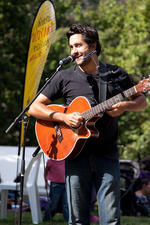 James Henry is in demand as a composer and sound designer, writing various blends of traditional Aboriginal and contemporary genres. His diverse set of skills has seen him compose for the Sydney Symphony Orchestra and the Sydney Philharmonia Choirs, work as musical director for the Dreamtime at the G opening ceremonies and the 'Tanderrum' Melbourne Festival Opening Ceremonies, as well as being involved in various theatre and dance productions, and commissions.

The strength in James Henry's music comes from his diversity. Being a singer/songwriter as well as a covers performer, he has toured around the country performing as a solo artist as well as a featured performer on national and international tours with the Black Arm Band and Buried Country. He also occasionally DJs and produces House and Techno music under the alias of Nurra.

Having worked closely with various communities reviving their languages through song, and recently completing his fellowship learning about traditional Aboriginal music and finding ways to incorporate it in to contemporary contexts and genres, he is able to walk the fine line between what is innovative but remaining culturally appropriate and sensitive. He is able to explore these avenues with his own compositions and commissions all the way from techno to full orchestral pieces.

As a singer/songwriter he gets his strongest influences from '60s pop/rock/folk melodists such as the Beatles and Simon and Garfunkel. His range of style with guitar in hand could be compared to Paul McCartney in the way he stretches himself from big powerful ballads through quirky light hearted comical stories to high energy rock. For the most part, but not solely, James is a solo acoustic performer and realising the importance of lyrics in a stripped-back format, his carefully crafted songs are designed to educate, inspire and humour. With a laid-back but engaging stage manner he breaks down the barrier between stage and crowd to create a personal experience with his listeners.

Biography provided by the composer — current to 2019