People should be encouraged to find their own voices and to follow their own paths through music. Although I compose in a very specialised genre, I appreciate many different styles and genres of world music. So: let many flowers bloom. 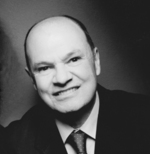 David Hirst composes electroacoustic music for a fixed medium, such as CD or tape, designed to be listened to over headphones or performed in concert over a multi-speaker sound diffusion system. His style has evolved over the years from algorithmic music composition, influenced by American computer music practices, to an acousmatic music aesthetic influenced by the French, British and Canadian composers, such as Parmegiani, Smalley, Harrison, and Normandeau, who use recorded sound to create musique concrète.

Some performance highlights of Hirst's work are the inclusion of the work Travail in a concert with Bernard Parmegiani and Gordon Monro at the Australasian Computer Music Conference, Western Australian Academy of Performing Arts, Perth in July 2003; a performance of Mon Dieu at the EuCu concert, Oscar Peterson Concert Hall, Montreal, in November 2002; Playing Fields, for percussion and live electronics, performed with Graeme Leak at the Astra Music Society's Scienceworks Concert, Melbourne, in November 1992; and Betameta, selected for performance at the 1983 International Computer Music Conference, Eastman School of Music, New York.

Recordings of Hirst's works have been released by Frog Peak Music, USA, PeP Recordings, Canada, the Australian Computer Music Association, and NMA Tapes, Australia. His works have been broadcast on national and local radio on ABC-FM, Radio National, ABC Local Radio, and the community stations 3CR and 3PBS-FM in Melbourne.

Born in Geelong, Victoria, Hirst graduated with a Bachelor of Arts degree from La Trobe University in Melbourne. Awarded the David Myers Medal as the most outstanding humanities honours graduate in 1981, Hirst subsequently completed a Master of Arts by research.

In 1986, Hirst took up a position as Lecturer in Electronic Music and Composition at the Tasmanian Conservatorium of Music. He returned to La Trobe University in 1989 as Senior Lecturer in Contemporary Music Technology, and from 1993 to 1995 served as Chairperson of the Music Department. In 1997, Hirst studied composition with Jonty Harrison at the University of Birmingham.

Hirst has published extensively on electroacoustic music, in journals such as Organised Sound, Array, Chroma, Sounds Australian, New Music Articles, Press Press Magazine, and he was the founding editor of Mikropolyphonie, the online contemporary music journal. Hirst was a Senior Lecturer in Educational Design at the University of Melbourne from 2000 to 2007. At the University of Melbourne, he completed a PhD with a music composition folio and a music psychology thesis entitled The Development of a Cognitive Framework for the Analysis of Acousmatic Music, and subsequently became a Senior Research Fellow in the Music and Neurocognition Laboratory of the School of Behavioural Sciences. Since 2008, he has been Senior Lecturer in Curriculum and Academic Development at La Trobe University.