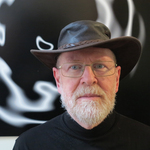 Gordon Monro's early education was in mathematics and science; he became a mathematician and taught at the University of Sydney for many years, retiring in 2006.

Monro's first engagement with music was as a chorister. He began composing seriously in 1989, working with Ian Fredericks, the then director of the Sydney University Experimental Sound Studio. He undertook formal study at the University of Sydney with Kirsty Beilharz, also attending the composition workshop of Peter Sculthorpe and Anne Boyd, and subsequently completed an M.Mus at the Sydney Conservatorium with Anthony Hood.

Monro's work for his Master's had a substantial audiovisual component, and since 2008 he has been working in visual art, completing a PhD in Fine Art at Monash University in 2016 under the supervision of Karen Burns, Bernard Hoffert and Vince Dziekan.

Monro's main interest in both music composition and visual art has been in writing computer programs to set up algorithmic and generative processes, which create either a complete work or a fragment of a larger work. His inspirations come in large part from mathematics and science, realms with their own logic and autonomy, transcending everyday human concerns. Monro's compositions include pieces for instrument and tape, for tape alone, and for live electronics, and a number of videos with sound. His work in visual art has resulted in digital prints and computer-based installations that run in real time.

Monro's musical works have been performed in Europe, Asia, North America, Australia and New Zealand, and broadcast nationally on ABC Radio. His tape piece Dry Rivers was awarded an honourable mention in the 1996 Prix Ars Electronica (Linz, Austria); his piece The Voice of the Phoenix (2) for bass flute or contrabass flute and tape was joint prize-winner at the First Australian Flute Composition Competition (Brisbane, 1999) and was selected as an ISCM recommended work for the ISCM World Music Days in Romania in 1999. In 2007 his video Dissonant Particles was selected for the inaugural Visual Music Marathon in Boston, U.S.A.

In visual art Monro has held a number of solo exhibitions in Melbourne and Ballarat (where he is based) and twice been a finalist in the Fremantle Print Award. In 2016-17 his real-time installation Nanocosm was shown at Stephen McLaughlan Gallery, Melbourne, at the Art Gallery of Ballarat and at the 2016 International Generative Art Conference, Florence, Italy.