I am interested in the healing properties of music and seek to marry the ancient and the modern through the use of acoustic and electronic sound. 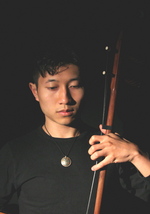 Nicholas Ng obtained a PhD in composition/ethnomusicology in 2008 with E/Prof Larry Sitsky and Dr Stephen Wild (ethnomusicologist) at the Australian National University. He has a Bachelor of Music (1st class honours) in composition and musicology from the University of Sydney where he was a student of Prof Anne Boyd, Prof Allan Marrett, Ross Edwards, Dr Matthew Hindson and Dr Kirsty Beilharz.

A keen performer, Ng plays the erhu (Chinese 2-string fiddle) and is in the constant search for new performative contexts from contemporary dance to meditation circles. He has performed at the Sydney Opera House Studio, Sun Yat-Sen Memorial Hall (Taipei) and Merkin Concert Hall (New York City). He periodically tours in William Yang's Performing Lines production, China (2007-present), which has been invited to various festivals such as the KunstenFESTIVALdesarts (Brussels), Melbourne International Arts Festival, the OzAsia Festival (Adelaide) and the Push Festival (Vancouver). Nicholas Ng has appeared solo and in ensemble at the Chinese Gardens Chamber Music Festival (Sydney), National Multicultural Festival (Canberra), Woodford Folk Festival (Woodford), Music by the Sea (Brisbane) and in 2009, at the Parliament of the World's Religions with Dr Kim Cunio, Heather Lee and Tunji Beier. In the same year, he performed in Erik Griswold's Clocked Out production, The States.

As a composer, Nicholas Ng has composed for the Melbourne Symphony Orchestra, Foundation for Universal Sacred Music, Saitenwind, The Song Company, The Australian Voices, Chronology Arts, United Nations Association of Australia, Australian Choreographic Centre, Tugpindulayaw Theatre, Sydney-Asia Pacific Film Festival, the Art Gallery of NSW and the Gallery of Modern Art, Brisbane. Published by Orpheus Music, his compositions have been broadcast on ABC Classic-FM and awarded prizes such as the 2005 Orpheus Publications Composition Prize. He is now developing a commission of three sacred compositions for the Cathedral of St Stephen.

A former lecturer at the School of Music, Australian National University, Nicholas Ng has presented papers on his research topic (Australian Chinese sacred music in Sydney) at conferences including the 38th International Council of Traditional Music World Conference, University of Sheffield (2005) and the 3rd Asian Australian Identities Conference, Curtin University (2009) and continues to research Chinese music in diaspora. His academic publications include:

Ng's music is often a sonic exploration of his Chinese roots whereby he draws from his research into secular and sacred music in and from China. In February 2009, he was engaged by Prof Huib Schipers (Director, Queensland Conservatorium Griffith University) to program and curate Encounters: Musical meetings between Australia and China (6-9 May 2010), a four-day event involving leading artists and scholars from the two countries. The event successfully integrated local and international scholars and artists including The Song Company, which premiered a new work by 18 Australian composed based on the historical Harvest of Endurance scroll.

In recent months, Nicholas Ng has performed in Queensland Conservatorium's fast-developing SoundSpace project and composed a new work for The Australian Voices based on a Han Dynasty bronze mirror and the poetry of the late Neville Thomas Yeomans (Queensland poet). He has also given a joint concert of sacred and secular music with Dr Kim Cunio and Heather Lee as part of Blacktown Performing Arts Centre's Echo Music Series.

Nicholas Ng is currently finalising a soundtrack for the Indian Oceans Productions webdocumentary, China to Australia.