An obsession with history, mythology and ancient literature, renders Oliveiro’s work riddled with themes from archaeological study and obscure urban legends. His music has been described as; 'epic', 'unashamedly ritualistic' and 'atmospheric' with 'Dreamtime overtones'. 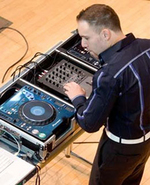 Mark Oliveiro (b. 1983), a Sydney native and Doctoral Fellow at the University of North Texas, is an emerging composer with diverse extra-musical interests. Whilst notions of narrative, programme and theatre, have always been a stoic component of his music, Oliveiro offers an exploration of the quintessence of ceremony inherent in all human expression.

An obsession with history, mythology and ancient literature, renders Oliveiro's work riddled with themes from archaeological study and obscure urban legends. His music has been described as: 'epic', 'unashamedly ritualistic' and 'atmospheric' with 'Dreamtime overtones'. At present, Oliveiro has an interest in exploring, by way of conceptual abstract and musical aesthetic, the notion of reconstructing lost or imagined performance traditions. Dance and movement, theatrics and technology, language and social media, are just some of the non-musical solutions most apt for the ever expanding, contemporary composer tool belt.

Oliveiro's interest in pulsating dissonance, reactive computer systems, the role of the performer and concert dramaturgy are the responsibility of revered mentors Michael Smetanin, John Gibson, Andrew May and Joseph Klein.

With a keen and equal interest in music of the acoustic and electronic medium, Oliveiro's music has been represented at national and international conferences and festivals hosted by: the North American Saxophone Alliance, the World Saxophone Congress, the International Horn Society, the Australasian Computer Music Association, the Aurora Festival Committee, the Society of Electroacoustic Music in the United States, Electronic Music Midwest, the British Trombone Society and many more.

Oliveiro is a graduate and distinguished alumnus of the Sydney Conservatorium and the Jacob's School of Music. His music has been commissioned by the International Horn Society and the Meir Rimon Commissioning fund, the Settimane Musicali di Stresa e del Lago Maggiore, Chronology Arts, Pictures on Silence, as well as numerous professional individuals.

Oliveiro is an active Disc Jockey and music educator.