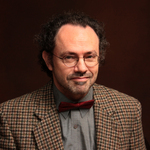 Paul Terracini is an Australian conductor and composer/arranger who returned to live in Australia in late 2007, after nearly 20 years living and working in Europe. He has held permanent positions as principal trumpet in the Australian Opera and Ballet Orchestra (1975-1979); as lecturer in trumpet, concert band, brass ensemble and big band at the QLD Conservatorium of Music (1982-1988); and as solo trumpet in the Danish Chamber Players, Denmark (1991-2007).

Since concentrating on composing, his music has been performed by, amongst others, the Chicago Symphony Orchestra Brass, Prague Symphony Orchestra, Australian Chamber Orchestra, Danish Chamber Players, Australian Brass Quintet, and at many music schools and universities in the USA and Europe. Many of his works have been recorded by the Prague Symphony Orchestra, with the composer conducting. His music for the two-part television series, Hymns of the Forefathers I & II, in which he developed many of the traditional English hymns into symphonic poems, received international acclaim and was released on CD and DVD by EMI. His title music for the television series, Classical Destinations, was featured on the 'Number 1 Classical Album of 2007', released by Decca.

In 2010 he was commissioned by the International Trumpet Guild to write two works for the ITG Conference, held in Sydney. In 2011 he was guest composer/conductor at Northwestern University in Chicago. For the second time in three years, the Chicago Symphony Orchestra Brass chose one of Paul Terracini's works, Gegensätze, for performance at Orchestra Hall, Chicago, in December, 2011. Around the same time, he wrote two new works for the International Trumpet Guild Conference in the USA in 2012.

In 2013, Paul Terracini wrote commissioned works for Den Kongelige Livgarde, Denmark, a work for Portugese tuba virtuoso Sergio Carolino, and a new work for euphonium, harp and strings. Over the year, his music was performed at the Australian Festival of Chamber Music in Townsville, the Sydney International Brass Festival, and at festivals and concerts in France, Portugal, Spain, Denmark, and the USA.

His work for large brass ensemble, Gegensätze, receives regular performances throughout the world. The Chicago Symphony Orchestra Brass gave the world premiere in 2011 and performed the work once more at its prestigious annual December concert in 2014. In July 2014, he was guest composer/conductor at Porto Conservatorium of Music, Portugal, for a week featuring his own music.

Paul Terracini's arrangement of Rhapsody in Blue, for solo piano and brass quintet, has been released by Melba Records with Timothy Young and the Australian Brass Quintet. A CD of his music performed by Sydney brass was released in 2015 on the Tall Poppies label.

Paul Terracini's catalogue of works can be viewed at his website: http://www.paulterracini.com/bio.htm

His music for brass is published by Kookaburra Music: www.kookaburramusic.com