Building a festival from the ground up 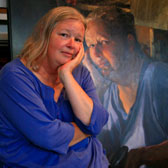 I’d been dreaming of getting an arts festival going in Kangaroo Valley almost since I moved here from Sydney 12 years ago. It was a response to desperately missing access to good music in live performance. I was attending the Davis Cup tennis in Sydney with a friend from the valley, and blurted out this idea in one of the many moments between sets. From that moment, the Kangaroo Valley arts festival grew its own wings. This friend, now the President, and her husband, now the Treasurer, are the backbone of the organisation.

I decided from the beginning to try themed festivals, because all the others I’d been to in the past were exciting but sometimes seemed to be a tad haphazard in the way different events were drawn together. I also wanted to feature many aspects of the visual arts, and promote the many fine local artists. In 2007 the first festival, themed 'Music and Art', was very successful – everyone involved enjoyed themselves, the performances were splendid, the exhibitions impressive, and we ended up with a small profit. Impetus for a second festival has led to the second coming up in May 2009, themed 'Music and Words'. In both of the first two festivals, we have commissioned new works and championed our local composers and artists.

It’s a huge amount of work for everyone. We have over 100 people from the small population in Kangaroo Valley working tirelessly for over 18 months to put these events on. In the last month everyone is run off their feet making last-minute preparations and solving last-minute problems. My role is to determine the performance program, which this year, apart from three concerts celebrating Peter Sculthorpe’s 80th birthday, includes theatre (we’ve commissioned four monologues), art song and choral recitals, melodrama, ensemble pieces, bushwalks and art exhibitions addressing the festival theme.

In 48 hours we stage 14 concerts, 5 exhibitions, 2 bushwalks and 2 late night social occasions. No wonder we are all bushed by the end of it! The performers come from all around Australia and overseas, and most have never performed in the region before. Our venues are small, so we have the advantage of intimacy between the performers and their audience.

In a small community, events like these bring people together working to a common goal. I have made many new friends and been inspired by the way the locals throw themselves into the fray. In rural communities in Australia there is an amazing amount of talent which, when harnessed, produces events the like of which you’ll never find in the city!! Of course, it helps to be living in one of the most beautiful locations in the country – it is inspiring to us, to our performers and artists, and to all our visitors.

Arts in The Valley
Kangaroo Valley, NSW
1-3 May 2009
www.artsinthevalley.net.au

Belinda Webster OAM lives in Kangaroo Valley, runs the Tall Poppies record label and is the artistic director of the Arts in the Valley festival.

The intent is clear. The first event in 2007 was promising, but the proof is in the execution. Happily, the 2009 execution at last weekend’s festival was excellent. The words and music theme worked very well (at least at the events your correspondent was able to cover). As a subtext, the festival honoured Peter Sculthorpe’s 80th birthday, opening with a review concert of four of his string quartets dating from 1964/5 to 1998. Played beautifully (in spite of a fiercely cold tent venue and some last vestiges of jetlag) by the Goldner Quartet, the juxtaposition gave a fascinating insight into Sculthorpe’s development as an exponent of the string quartet form. Interposed, and as encore, three of his miniatures presented a glimpse of a young and melodic Sculthorpe (much to the relief of a few attendees who apparently found the other works “too contemporary”!).

Less successful was the “Our own composers” concert. It started well with Martin Wesley-Smith’s “Welcome to the Hotel Turismo”, a “sit up and take notice” work, enjoyable as much for its still relevant political references as for a well judged melding of electronics and cello, played in David Pereira’s typical relaxed style. The work deserves more airings, but then, where do you find cello recitals happening these days. Mary Finsterer’s “Madam He” was less satisfying. Merlyn Quaife did well what she does well in the soprano part, but doubts must remain about the work’s programmatic basis and form.

The second half worked better with the premiere of a solo percussion version of Rosalind Page’s ethereal  “ishi….sono”. This was followed by an Andrew Ford work “Learning to Howl” which made a lot more sense than the earlier vocal work. It also encapsulated better the words and music theme of the festival.

One of the great joys of the two Kangaroo Valley festivals so far has been their Frozen Music series. The opportunity to hear chamber music in a home environment, in this case in some of the finest architectural gems in the Valley would be drawcard enough. But the chosen event of your correspondent would have been magical in any venue. Take four double basses, a Chekhov short story (about, would you believe, a bass player) and a mix of music arranged and written for the double bass, and you have the ingredients for a memorable experience. Amusing, quaint, droll and never quite serious, this was a gem worthy of presentation in venues as diverse as Angel Place or the Famous Spiegel Tent. If Tall Poppies has the sense to record it, your correspondent will take bets it will outsell many of their more serious discography.

The final concert, An 80th Birthday Tribute, started with the Goldner and William Barton, in the beautifully sculpted Jabiru Dreaming. Then followed a series of fourteen miniatures composed in tribute by a veritable A to Z of Australian composers. (Well, a Boyd to Wesley-Smith to be precise). It would not be appropriate to single out any one in particular, but it was beautiful to hear how, in their own characteristic styles, the composers paid homage to a master with whom many of them had studied and formed longstanding friendships. Some managed better than others to make a comprehensive statement out of their sixty second sound bite, but all had the beauty of a love expressed in music. Belinda Webster did us all a service in conceiving this format.

The concert, and festival, then ended with a return to classical mainstream. No words, just music. Schubert’s C major String Quintet seemed an odd choice for the big finish, but then it is such a grand work, it could be argued it fits wherever it may be placed.

The concurrent concert programming, offering variety to everyone, makes hard choices for attendees in the Valley, your correspondent included. It will have to be left to others to comment on the best of rest. In the meantime let us hope this festival continues to work its wonders in 2011.