For ten years, the State Library of Victoria has been offering Creative Fellowships to scholars and artists interested in investigating the resources and collections held within the library. In 2013-14, the Library offered four special Dome Centenary Fellowships to commemorate the centenary of the library's famed domed La Trobe Reading Room.

Criteria for these fellowships included the requirement to celebrate the dome as a place, to bring people into the library, to explore the potential of the library and to imagine the future of the library.

What better way to do that than through music, and especially through singing! And so the Dome Centenary Choir was born. 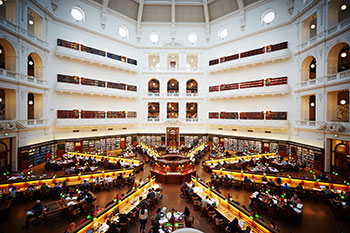 La Trobe Reading Room at
the State Library of Victoria.

The principal aim of my project was to marry the Library's extensive holdings of Australian choral music with the institution itself as a public venue and performance space. In order to celebrate the library's centenary I wanted to celebrate what lies within, i.e. Australian choral repertoire, by engaging with those outside, i.e. the general public.

In essence, the Dome Centenary Choir was a choir for the community. Its members came from the library community itself - staff, friends and associates, as well as visitors and members of the public at large. Through our rehearsal and performance activities, the choir celebrated not only the library's music holdings but the library itself in a physical sense - the public space that is the Dome, a meeting place for like-minded individuals in the heart of Melbourne's city centre.

Advertised as a free event, I hoped to engage with as many interested choristers, singers and music enthusiasts as possible - open to all with no prior experience or knowledge necessary. I wanted to connect with a broader audience - students, teachers, historians, anyone who might have been interested in visiting the library and, most importantly, anyone who had always wanted to sing.

So yes, it was a great idea, but would it actually work? What if nobody is interested? What happens if nobody signs up to come sing? Perhaps it will be me, a pianist and a solitary soprano? Or worse - me, a pianist and a solitary tenor? Or even me and just two tenors?! Such were the thoughts that permeated my restless mind during the many sleepless nights in the lead-up to the event. 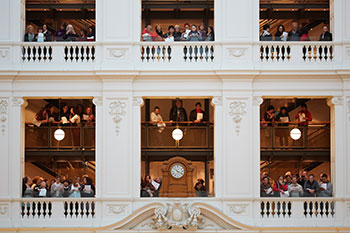 Singers of the Dome Centenary Choir in situ.

Fortunately I need not have worried. Exceeding all expectations, some 250 enthusiastic choristers signed up to be part of this one-off project, and I was absolutely thrilled this cohort included a number who had never sung before. Their initial apprehension was soon overcome with support from more experienced choristers - mentors who soon became friends as we all shared in a unique choral experience.

My thinking in devising the Dome Centenary Choir project was fairly straightforward. Our voice is the musical instrument with which we are all born, and like other collective forms of social activity such as involvement in clubs, societies and sporting teams, singing, quite simply, makes you feel good.

For it is indeed a simple act and one children engage in without a second thought, but it is also one for which, sadly, we as adults tend to think a certain 'qualification' or some kind of prerequisite experience is necessary. Surely I couldn't just sing like I did when I was in primary school, could I?! Well actually, yes! Dispelling this myth and breaking through the 'I can't' barrier were also important dimensions in the development of the project.

For a number of reasons Australian choral music offers a wonderful introduction to singing, and the literature available provided excellent subject matter for this project. In contrast to European choral literature, for example, the text is in the vernacular, the subject matter is familiar and the harmonic language ensures the works' accessibility.

During two sessions over the weekend of 14-15 June, I put together a summarised walk-through of the evolution of Australia's choral heritage - a sort of 'Around the World in Eighty Days approach', as it were.

Gordon Kerry's setting of Shakespearean text featured alongside settings of poetry by Australian icons Kenneth Slessor and Dorothea Mackellar. Colonial songs about drovers, convicts, sheep, stockmen, shearing and, indeed, more sheep proved a huge hit with everyone but particularly with foreign visitors, newer Australian residents and those from diverse ethnic backgrounds for whom these songs, as well as their context and subject matter, were entirely new.

Alongside teaching and rehearsing the works selected it was necessary to explain and define everything from a jumbuck to a chronometer, share tales of bushrangers' exploits and attempt to keep a handle on lively discussions regarding sheep shearing techniques, a subject which seemed to be the cause of endless fascination!

For those who were familiar with these colonial folk songs, there was still much to be discovered. There were gasps of apparent shock on learning that the melody to Click Go the Shears belongs to an American Civil War song and that the tune to Botany Bay first made its appearance in a London musical in 1885 - move over Andrew Lloyd Webber!

Following the rehearsal session we moved en masse in a covert operation to our places in the Dome. I, as conductor, stood in the wooden panopticon on the floor of the room and without prior notice, somewhat flash mob-esque, we began to sing. Reactions of unwitting audience members included shock, surprise, delight, admiration and a degree of bemusement. After all, a library is not a venue to which one tends to go when wanting to hear a choir. And that, also, was indeed the point.

Australian conductor Carolyn Watson is Orchestra Director at the renowned Interlochen Arts Academy in the USA - the posting follows a successful tenure as the inaugural conductor-in-residence at the Sydney Conservatorium of Music High School in 2011-2013. Since moving to the USA in 2013, Watson has been engaged as a conductor by the Detroit Symphony Orchestra and conducted the World Youth Symphony Orchestra. Carolyn Watson is the recipient of a number of prestigious national and international awards for young conductors.