Having been back in Australia for over a fortnight now, the whole Ensemble-Offspring-China-experience almost feels like a dream - a distant memory of glass harmonica pampering, sticky humidity, cold Tsing Tao beer and Chinese kitsch.

Arriving a day later than the rest of the team, I was greeted on my way from Shanghai airport by balmy weather, a trippy bridge sparkling in all the colours of the rainbow along with the dazzle of the Bund from afar - I knew I was in for a feast during the coming 10 days.

The Fractured Again crew comprised Damien Ricketson (general production guru and composer), Jason Noble (clarinettist and glass harmonica specialist), James Cuddeford (glorified glass panel hitter and violinist) and Andrew Wholley (video artist and glass harmonica fixerer extraordinaire). We were to be presenting Damien Ricketson's multimedia extravaganza on glass, Fractured Again, which we premiered at the 2010 Sydney Festival. This was only the second international tour our innovative little arts company had embarked on in its history.

Based on reports of a damaged glass harmonica being held in quarantine, I was slightly concerned, as I stepped into the hotel lobby, that Damien would announce to me that the tour had been called off. Rather, it was a huge relief to be greeted by his bubbling enthusiasm and excitement - tales of the fantastically supportive staff at SHMOG (Shanghai Museum of Glass), that the new glass panels sounded amazing and the glass harmonica only had two broken bowls, which had been successfully removed so that we wouldn't incur an injury whilst playing it! 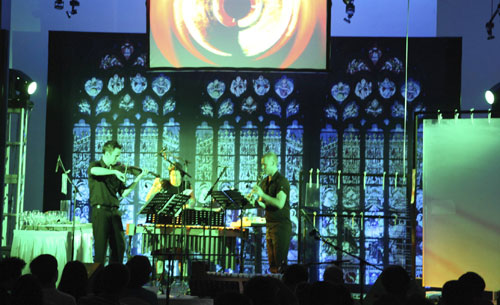 The brand new SHMOG is almost an hour away from the centre of Shanghai via metro - the museum incorporated our two presentations of Fractured Again into a sort of open night at the museum, and it worked a treat. There were 700 people along with the Chinese TV over the two nights (literally bulging out of the hall itself), and the audience revelled in the spectacle and uniqueness of the event. Cindy and Carmen and their fantastic support teams at SHMOG made the seemingly impossible happen in Shanghai - it went without a hitch, and we were almost in shock, on leaving, at how well it had all gone.

Then on to Hong Kong where we were guests of the HellHOT! New Music Festival and its artistic directors, William Lane (an Australian viola player now resident in Hong Kong) and Samson Young (a Hong Kong-based composer). We each presented solo works by Xenakis, Reich and Carter, alongside a concert version of Fractured Again at Hong Kong University. Once again the show was sold out. We could put it down to the fact that Hong Kong is now James Cuddeford's home town as concert master of the Hong Kong Sinfonietta, but we like to think it was due to the international reputation that preceded us…

Last stop, Macau. My ex-percussion student Andrew Chan was our host on this tiny little island. He had been back at home for just a few months and he told us how, in the time he had been in Sydney, they had reclaimed land and built a plethora of new casinos on it. Talk about sensory overload: those shimmery lights on the first night in Shanghai were nothing compared with the tacky grandeur of the casino night life in Macau. But our concert was at a venue somewhere altogether more earthy and real worldly - the Ox Warehouse - a funky independent arts space on the rim of the urban landscape in what was indeed once a genuine ox stable.

The venue was packed and the lack of air conditioning was a challenge for both performers and audience alike, but there was something special in the air on this, the last night of our tour. The concert went brilliantly and it was a fitting end to one of the most memorable tours I have ever had the pleasure of being a part of. 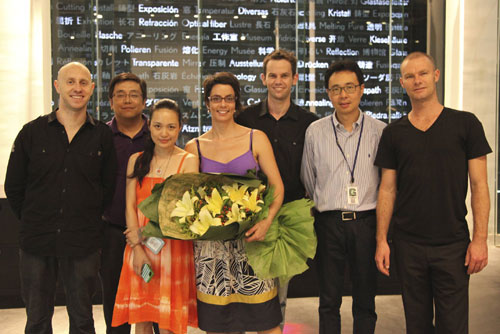 Claire Edwardes is a percussionist and co-artistic director of Ensemble Offspring.