In July 2011, Peter Knight released a new album called Residual with his long-time collaborator Dung Nguyen. Out on the new Perth/Brussels label, Parentheses, it features Knight playing trumpet as well as processing both his trumpet and Nguyen's instruments in real time (mostly) via laptop electronics. Dung Nguyen plays traditional Vietnamese instruments the dan tranh (16-string zither) and the dan bau (single string zither) along with the electric guitar modified in Vietnamese style.

This article is the latest instalment in our 'Insight' series, in which the AMC's represented artists take a close look at some aspect of their own work. Read also: Erik Griswold and Vanessa Tomlinson's 'Insight' article about Clocked Out's collaborative project Wake Up!, Gordon Kerry's article about his Symphony and Drew Crawford's article about his mini-opera Bohemian Deconstruction.

Residual grew out of my increasing interest in live electronic processing of my trumpet and out of Dung Nguyen's wish to explore preparations and alternate tunings for his traditional Vietnamese instruments. Dung and I have worked together for around ten years in the sextet, Way Out West, which creates a space for Dung's traditional instruments in a contemporary jazz setting. We have developed a strong working relationship built on the notion that we want to create new music that integrates different music traditions, as distinct from the multicultural pastiche approach that characterises so much music grouped under the 'world' banner. This basic motivation is carried into Residual although the settings created contrast greatly with those of Way Out West.

The title of the album (and of the opening track) Residual, is supposed to communicate something about the relationships created by the very different traditions of music making from which Dung and I emerged and the contemporary Australian context in which we now work. It is about how the 'residue' of traditions can seed new ideas: I'm a jazz musician and although this album sounds nothing like jazz I think it is informed very much by that background. Similarly, Dung grew up playing Vietnamese traditional music but this album sounds nothing like that either. What's interesting, however, is that without these traditions and our experiences of them this album would not exist. 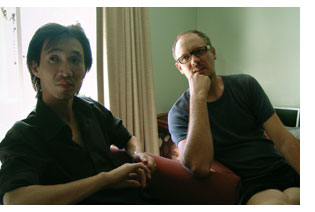 Residual took around two years from conception to completion and began with a series of improvisations recorded in my home studio. I set up a number of digital processing environments using the Ableton Live platform on my laptop along with several good microphones. We then simply pushed 'record' and played together changing combinations of instruments, tunings, preparations, and approaches until we had exhausted a range of possibilities. We worked for around five days, trying not to worry too much about outcomes, instead emphasising the spirit of the moment. We experimented and expanded beyond the scope of our initial ideas, incorporating 'prepared' piano (which was in fact just my old upright with the strings threaded with pieces of paper and stuck with gaffer tape and old screws) as well as the electric guitar (which Dung has modified by scalloping the frets in Vietnamese fashion).

I then used these recorded improvisations as the 'raw' material for a series of compositions or sound works that were developed in the studio, employing the studio as a composing tool. The finished pieces are documented in the form of a CD recording, the process of their creation inverting the usual relationship between improvisation and composition in that the compositional process happened in response to the improvised moment rather than the other way round.

This is a mode of music making that is tactile and intuitive and I think this works with my training as an improviser, which has given me an approach to music making that is as much physical as it is cerebral. Musical ideas come to me from doing as well as from thinking, and my musical imagination seems to be triggered by the physical act of playing music (I play two chords on the piano and am drawn to respond with a third).

I wrote about this process in my recently completed doctoral dissertation in which I examined the relationship between improvisation and composition (Knight 2011, p. 88), noting that the improviser trains to respond in the moment: to conceive and act simultaneously. Kanellopoulos quotes Sarath in a fascinating discourse on composition and improvisation: 'This attitude [of the improviser] delineates a conception of structure radically different from the one employed in the compositional mode of musical creation, understood as a 'discontinuous process of creation and iteration (usually through notation) of musical ideas' (Sarath, 1996, p. 2)' (Kanellopoulos 2007, p. 109). He continues:

Working in compositional mode entails the creation of patterns with the prospect of forming larger structural wholes, and of course these patterns are subject to revisions informed by the wholeness of the piece as it gradually develops. Sarath (1996) argues that the composer experiences an, '"expanding" temporality', 'where temporal projections may be conceived from any moment in a work to past and future coordinates'. To work in this way means to search for sounds with the aim of developing a 'piece'; it means to operate within the realm of experience... In improvisation, however, time is experienced 'in an inner-directed "vertical" manner, where the present is heightened and the past and future are perceptually subordinated' (Sarath, 1996, p. 1). Thus, the way the 'musical past' informs the 'musical future' is very different from the conscious search for multilayered structural relationships which characterizes composition. (Kanellopoulos 2007, p. 109)

Kanellopoulos's and Sarath's observations here resonate with my experience as improviser and composer especially with regard to the manner in which Sarath describes the contrasting experiences of time for the improviser and composer. During the development of Residual I was constantly popping between the two - improvising with a heightened sense of the present then zooming back to search for the 'structural relationships' Sarath identifies as being important to the modality of composition. Sometimes I think of this process as being a bit like 'fishing'. I improvise on an idea without thinking too consciously about what I'm playing, instead just trying to respond moment by moment, I record these improvisations then I listen through them with my composer's sense of temporality to see what I have 'netted.' Musical ideas reveal themselves and logic emerges, partly through preconceived structural and aesthetic considerations and partly through applying intuition to trial and error processes.

The piece opens with the synth sound, which I used to create a looped figure. Dung answers with phrases played on the dan bau (single string zither) that I sample, reverse and loop. He then begins to tap his dan bau with a violin bow and I process this sound by distorting it, sampling it then radically downsizing the bit rate of the samples to further 'crunch' them. I also apply a long reverb and reverse some of the samples to create a swell of static though this was added in post-production mode. In addition, I use a number of other plug-ins to process various parameters of the sounds semi-randomly and having set all this in motion I pick up my trumpet and improvise, playing the instrument without a mouthpiece to capture the flute-like sound that can be heard on this track and two other tracks on the album (Residual and Autumn Music).

Like Minky Star, Residual (the opening track on the album), is another improvisation that I left largely intact using editing and post-production processes only to enhance the form that emerged from the original improvisation. After the opening swirls of sampled and reversed trumpet breath sounds, I set up a drone note on the horn, which is sampled and looped. Dung then enters with a sparse melodic phrase played on the dan tranh before settling into a repeated figure. I process his notes using two granular synthesis plug-ins, which sample small 'grains' of sound, then process them according to a range of parameters. One of the plug-ins, 'Scrubby', transposes the notes into different registers allowing me to develop melodic cells out of the repeated notes played by Dung. I also add another note with my trumpet, which I sample and loop and then apply Scrubby shifting the register of the note and imparting to it a 'stuttering' quality. This track is about repetition and cycles; it slowly builds then fades employing a restricted set of musical materials.

On the other tracks recorded for the album the studio element was far more significant to the process of their creation. With Travelling, this process commenced with the prepared piano figures that open the piece. They are made from a series of short improvised samples that I recorded and looped and placed in a 'menu' of choices. I improvised with these choices processing them in real time in duet with Dung who responded on the dan tranh. We recorded several passes like this employing different preparations for the dan tranh including using paper clips and threaded pieces of paper to create buzzing effects, and sticky tape to radically deaden the strings. From there we developed some 'tutti' melodies, which we overdubbed then I used all these elements in post-production to 'assemble' the piece, in the process blurring and overlapping the modalities of composition and improvisation.

Phase Pedal was developed in a similar manner and is based on a different treatment of one of the same prepared piano tracks used in Travelling. I took that sample and worked it, improvising with it on Ableton using a 'phaser' plug-in and various delays. Once I felt I had something interesting Dung came to the studio and I composed a small melodic fragment for him to play on a heavily distorted guitar set up to be on the edge of feeding back. Dung used this figure and this sonic environment as the starting point for a series of sparse improvisations from which I assembled the guitar parts in post-production.

The blurring of processes that I describe here in the creation of Travelling and Phase Pedal, as well as in the other pieces recorded for Residual, reflects one of my central aims as a composer, which is to create music wherein it is impossible to discern where composition ends and improvisation begins: music that unfolds with the inevitability and inner logic of composed music but with the energy, immediacy, and spontaneous complexity of improvised music. The primary motivation, for me, in the making of Residual was to extend this interest in the meeting point between improvisation and composition to include the interstices between cultural traditions, between modes of music making, and between direct and abstract forms of musical communication.

Australian trumpeter-composer Peter Knight is a multidisciplinary musician who has gained wide acclaim for his eclectic approach, which integrates jazz, world music, and experimental traditions. He leads several projects of his own and appears as a soloist in a range of settings. He also composes for theatre and film, and has created sound installations.

And on the other hand...

it's also a beautiful CD to listen to :-)  Here's what a reviewer said recently: