Nicole Murphy writes about Stolen: a 45-minute work for solo electric guitar and chamber ensemble that forms part of the folio of works for her PhD at the University of Queenland. Stolen grew from its beginnings - a 7-minute work premiered at the Norfolk Chamber Music Festival in June 2014 - into its current form through a collaboration with a dedicated group of North American musicians.

Nicole Murphy's current projects include a chamber opera commission for the New York-based Experiments in Opera, for premiere in May 2017; and a new work for cello and piano for the Vox Feminae festival in Israel in April 2017. Her earlier opera The Kamikaze Mind, will also be performed in New York in 2017, by the Fresh Squeezed Opera.

Recent reflections on the progression of my music over the past fifteen years have illuminated and contextualised my current aesthetic ideals. During my undergraduate studies my work could be described as slowly evolving, static music, featuring thin textures, subdued dynamics and a preoccupation with the timbral capabilities of the instrumentation. It was seamless music, devoid of sudden changes or surprises. It was reserved, and a little hesitant. There was an economic approach to the musical materials used, as I considered Peggy Glanville Hicks' maxim: 'a work is finished not when you can't add anything more, but when you can't take anything else away'1.

In the years following my undergraduate studies I had pared the music back until nothing else could be taken away, and consequently began to move back in the opposite direction. My music retained its static nature due to the use of drones and subsequent lack of harmonic mobility, but I began to focus on creating rhythmic intricacy in melodic passages, and building layer upon layer to thicken the texture. I also experimented with the use of surprise, incorporating more abrupt musical contrasts through dramatic shifts in tempo, texture and dynamics. I wrote faster music, with more moving parts, and began to incorporate ritualistic, driving ostinati into my work. There were still periods of silence and introspection, but the music generally became less hesitant and more directed.

Today my music encompasses moments of both extremes, from the thin, spacious, hesitant sound world of my undergraduate years, to music that is transfixed by elements of rhythmic and textural intricacy, contrasts in tempo, and driving ostinati. A recent work that exemplifies these aesthetic principles is Stolen, a forty-five minute piece for solo electric guitar and chamber ensemble.

In 2014, an ensemble of musicians from the USA and Canada came together under the baton of conductor Julian Pellicano at the Norfolk Festival of Chamber Music. Premiering at this festival was a seven-minute piece (you can watch this performance on YouTube) I had composed for clarinet/bass clarinet, electric guitar, percussion, piano, violin and double bass. The centrepiece of this work was an extended electric guitar solo, performed at the festival by Solomon Silber. At the conclusion of the festival, Silber approached me with a proposal to collaborate on an album-length work for solo electric guitar and chamber ensemble that incorporated the seven-minute piece as a central movement.

After grappling with this idea for a number of weeks, I decided, instead, to break the original piece down into its raw materials, developing the musical material of each section further. This approach allowed me to maintain a link to the architecture of the original piece, as well as providing an opportunity to engage more deeply with the thematic material. One year later, the same ensemble of musicians came together, again with conductor Julian Pellicano, and, during a ten-day residency at Avaloch Farm's New Music Institute (NH, USA), Stolen was rehearsed and refined, and then recorded at the nearby Cedar House Studios. The recording process was documented by director Mike DeMatteo, resulting in a performance-documentary that was released by Elm City Records.

Stolen is performed as one continuous piece of the music without breaks between movements. Placed among the ensemble movements are a series of solo movements, one for each instrument in the ensemble. These solo movements are designed to be performed as 'stand alone' pieces, as well as existing as movements within the context of the larger work. The original seven-minute piece was composed in response to the poem, 'A Scheme for Brightness', by Sydney-based writer Richard James Allen2. Allen's writing has provided stimulus for a number of my works over the past decade, including piano trio Surface II, orchestral works Border and Elsewhere, and the adaptation of his fascinating novella The Kamikaze Mind as the libretto for a chamber opera of the same title that premiered in Singapore in 2013.

One of the aspects of the poem that intrigued me was the structure. 'A Scheme for Brightness' opens with strong, tense imagery that gradually unfolds to a resolute acceptance towards the end of the poem. I aimed to structure the music in the same way, so that the piece opened with an intensity that gradually dissipates as the piece continues. The extended forty-five minute work borrows key elements of the form from the original seven-minute piece, mirroring the voyage from a wild, raucous opening (Movements I and II), through an introspective middle (Movements III, IV and V(a)), to a serene and resolute closing (Movements VII(a), VII(b) and VIII). There is a slight derivation in Movements V(b), V(c) and VI, where the rhythmic energy increases in order to provide contrast in the longer form.

The vivid imagery of the poem is communicated through the manipulation of thematic material in the piece. For example, the opening of Stolen features a dark, abrasive sound world, punctuated by low-register, dissonant piano chords and coloured by an ever-changing range of gestures from the remainder of the ensemble.

Referencing the lines of the poem quoted above, this movement presents material from Movement II that has been 'so stretched out that the pieces don't even look like pieces anymore'. The resultant sound world is dark, unpredictable and ominous, foreshadowing the chaos that is to come in Movement II.

Movement II portrays the urgency and drama of the opening lines of the poem, and references the 'four wild corners of the universe' mentioned later. In this section the electric guitar and violin present fragmented melodic material over a relentlessly driving ostinato performed by rest of the ensemble. 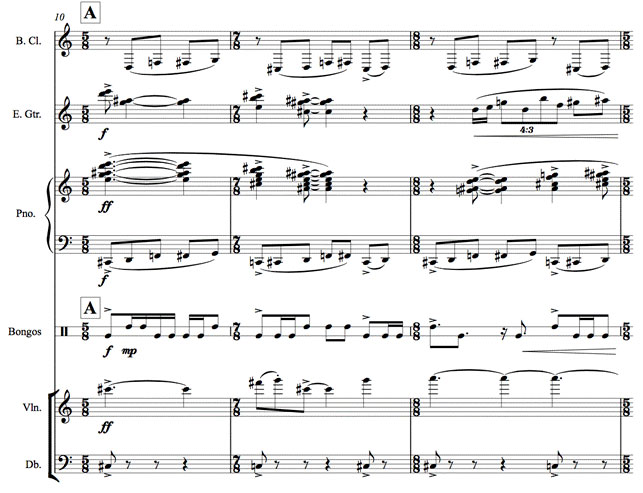 The relationship between the electric guitar and the violin is largely combative. Speaking in short and abrupt gestures, their dialogue is often rhythmically abrasive, with only occasional moments of interaction with shared melodic material, rhythmically offset.

The inner movements take a more introspective approach, featuring delicate textures that shift the focus to the lyrical extended solo passages, representing the presence of the personal pronoun, 'I', introduced in the middle of Allen's poem. The final movement subtly references the opening of the piece in a number of ways. It utilises a similar texture to Movement II (a central ostinato over which two melodic instruments are heard), but the mood is distinctly different, referencing the resolve at the end of the poem.

Over the forty-five minute duration cohesion is created by the manipulation of a number of key motifs. For example, manipulations of the driving ostinato from Movement II are used in the vibraphone, piano, and double bass solo movements. Another motif that features heavily in the work is 'golden grain' motif. This motif references the final few lines of Allen's poem: 'That gleaming grain, of golden sand. That piece of matter, with the universe in it'.

The 'gleaming grain' motif is a short polyrhythmic gesture that is only heard in the high register of the piano at soft dynamic levels:

Constructed from a combination of minor seconds and minor thirds, this motif contains the pitch material ('the matter') from which the main motifs in the work ('the universe') are constructed ('that piece of matter with the universe in it'). It appears in the slower, more spacious movements that feature thinner, delicate textures and subdued dynamics.

Collaboration permeated the composing process from the pre-compositional design of the solo movements, to refinements made during rehearsals, and the post-production decisions made in the studio. Each solo movement is designed to reflect the personality of the player for whom it was written, from the energetic and feisty solo piano movement that pays homage to the adventurous spirit of pianist Miki Sawada, to the gentler, more lyrical and expressive qualities of the solo violin movement, written for the softly spoken Canadian violinist Ilana Waniuk. Soloist Silber's unique performance style, a result of his background in both classical and contemporary (i.e. popular) music, strongly influenced the aesthetic of the piece. The solo passages, though strictly notated, are deliberately written to sound improvisatory, due to the metrical ambiguity created by the rhythmic construction of the phrases.

Movement III: Organic development and metrical ambiguity of the guitar solo (bars 20-44), sounded over a static drone in the strings.

As both soloist and producer of the album, Silber had a clear artistic vision for the piece. The post-production decisions were led by Silber, in collaboration with myself and conductor Julian Pellicano. Often the post-production manipulations provided a digital exaggeration of the acoustic intent of the piece. For example, the tape delay added to the recording of the solo clarinet movement provides a digital enhancement of the acoustic effect of the sympathetic resonance of the piano strings (the result of the damper pedal being depressed for the entire movement).

When I composed the seven-minute work in early 2014, I had no idea that two years later it would result in an album-length piece, complete with post production by Silber, six solo movements (that have been performed as stand-alone pieces independent of the larger work), as well as DeMatteo's performance-documentary of the piece, which presents the recording process of the piece from start to finish superimposed with commentary from the ensemble, conductor and myself.

As a whole, Stolen exemplifies the dual sound worlds that my music has occupied in recent years, presenting energetic, aggressive and driving sections of music alongside sections of thin delicate textures overlaid with lyrical melodies.