Out of Time: asynchronous music for virtual and socially distanced choirs

by Diana Blom and Brett McKern

Diana Blom and Brett McKern introduce two volumes of Australian asynchronous choral music, Out of Time I (sacred) and II (secular). We regret that we can't offer these titles via the AMC Shop at the moment, due to Wirripang titles being unavailable in hard copy, however you can order a digital copy via the publisher, and get rehearsing with your own zoom choir!

Asynchronous choral music is an evocative sound world for compositional and vocal exploration. Out of Time is two volumes of Australian choral music that plays with the idea of music out of time - asynchronous music. The pieces are written for large and small choirs, for choirs meeting in person/on-site, but also choirs singing socially distanced and online.

Polish composer Witold Lutoslawski used several kinds of asynchronicity - small-scale controlled aleatoricism, he called it - writing pitches, dynamics, rhythms, articulations, plus entrances and section ends for instruments and voices, but with deliberate non-synchronisation between the coordination of the rhythms in each part. This results in a richness of texture because of the diffusional effect of asynchronicity contrasting with synchronous rhythmic writing.

Composers in Out of Time explore asynchronous sections and absolute homophony, and also contrast morphed and absolute section changes in their choral writing. The global pandemic and lockdowns precipitating a dependence on online environments, and previous performances of Andrew Schultz's evocative Music is a Gentle Hammer (1991), were triggers for these two volumes of asynchronous choral music - sacred as well as secular. We felt that, if choral music can't be sung live, and can't be sung synchronously online, then find music that does suit the conditions and times. The Schultz work, plus McKern's St Luke Service and Holy Trinity Service, (2009-12) were the only representatives of an existing small Australian asynchronous choral repertoire we could find.

In online performance it is impossible to precisely determine entries and cut-offs, as individual internet connections will vary in speed, and the differing algorithms of video conferencing software will favour some musical elements over others at various moments. In live performance a conductor might determine some or all of these elements, but the asynchronous choral technique will create tone clusters, and even sections that morph from one to another.

This is not the sound world of Eric Whitacre and his evocative, individually recorded parts, digitally stitched together to create the effect of a larger whole. The works in Out of Time, like Lutoslawski's Trois Poemes d'Henri Michaux, for example, explore unrest, disquiet, murmuring, meditation and other sensations through the diffusional techniques of asynchrononous writing while ensuring standard harmonic sections retain their character. Significantly, a choir performing and rehearsing music from Out of Time is making music together in real time, having a group musical experience rather than relying on subsequent editing to create the ensemble. 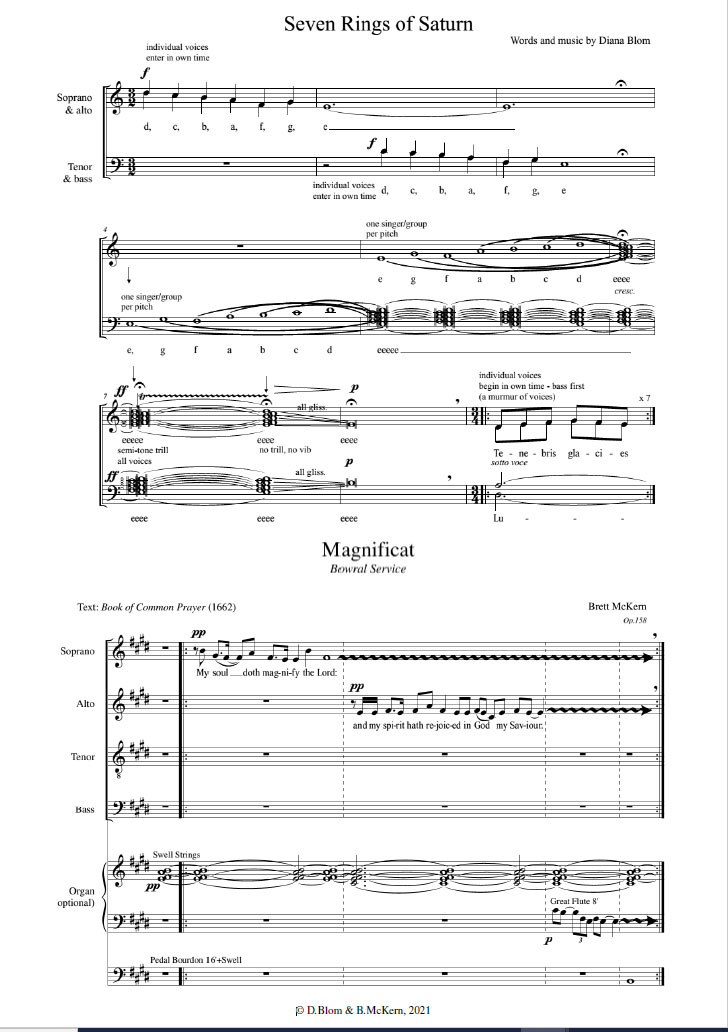 The Schultz work, Music is a Gentle Hammer, looks short and simple in conception but in performance it takes more time, requires careful pitch, balance, asynchronous timing and is extremely effective. Experience has shown that student choirs achieve a successful choral outcome with this work every time, and it is also one of the works in this collection that explores thoughtful moments about music and time.

Composers have chosen texts with many different moods. Tania Owens creates the constant movement of the ocean in her Waves in the Ocean, and Diana Blom's Witches' Cauldron (with text from Shakespeare's Macbeth) bubbles and seethes with ill-intent. The floating resonance of a large cathedral is captured in the sacred works in Volume 1, whether Brett McKern's liturgical works, or sacred works setting Biblical stories (Sonia Sozio) and messages (McKern and Blom). These sound worlds are more piquant because of the asynchronous textures. Asynchronous writing captures perfectly the conversational chatter environment of alfresco dining (Brennan Keats) and of old friends (Rod Heard). Even the fragments of outer space around Saturn (Blom's Seven Rings of Saturn) can be heard.

We trialled several of the works over the Zoom platform with a choir of ten voices. The experimentation was great fun and compositional and choral techniques were honed and developed. Because of the range of techniques used, the works provide repertoire for choirs who are socially distanced in a venue, as well as for performance over the internet. Our online experiments included choristers from Melbourne and Sydney, but they could have been anywhere in the world. It was always intended, however, that this repertoire could be performed live as well as over the internet. Live performances might experiment with spatial arrangements, adding a further dimension to the aleatoric sound world. 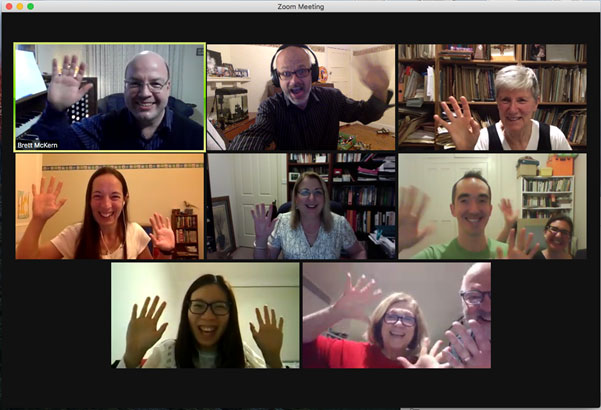 There is an art to singing asynchronously - deliberately and variably 'out of time' - with fellow choir members. It involves close listening in relation to timing and balance as well as pitch and vocal timbre. The smaller the choir, the more difficult it is to create a truly asynchronous texture, but, again, this comes with practise. By contrast, larger choirs may find a need for more control and less aleatoric effect in order to keep a work confined.

Some of the works presented in Out of Time will be more effective live than over the web, some will work equally well in both environments. Similarly, some composers have left more or fewer decisions to the choristers and conductors, but these can potentially be varied as needs be depending on the medium of performance. We feel choirs can enjoy the different experiences of multiple online and live performances even of the same work.

Out of Time is, first and foremost, an exploration of asynchronous, small-scale controlled aleatorism, to use Lutoslawski's terms, written for singing anywhere at any time. But it is also music to explore now while in the different controlled environments brought about by the pandemic. It will help keep choirs singing.

> Out of Time I (sacred) and II (secular) - details on AMC Online. Currently not available in hard copy - digital download available via the publisher.

Truly 'contemporary 21st C art music': Music of and for our times.

The lived experience of time during the Covid crisis is so distorted, that memories of events before and during become asynchronous in their retelling. This book of music seems so appropriate to the exact experiences we are living both inside and outside our music selves, as whole people, here in Australia.

As an 'experimental' modernist composer I have been fascinated by the ideas of aleotoric and other experiments in asynchronous performances.  As an occasional performer I have participated in online group music-making during these virus times and found the platforms to be particularly challenging to conventional ways of making the sound of the music vibrantly 'sing'.  As a community music-maker working with people who are not confident to give voice to their inner longingings to be musical, I hear over and over how they love to make music in the privacy of their cars on their way to work, but now in front of a 'musician' and each other, their first instinct is to clam up.

From these experiences, I have explored using various improvisational techniques and semi-random processes in live performances.

In terms of on-line gatherings, I have often wondered about how things could be done differently and investigated various on-line items as they cross my computer screen, from those digitally engineered choirs carefully layered voice by voice from individual singers, to using radio technology in a car park to allow singers to sit in their cars while being conducted by live conductor on a very high pedestal.

I am really looking forward to hearing the music in these books. The whole concept behind the books and the individual pieces of music inside, is exciting. Congratulations, this is truly 'contemporary 21st C art music'. Music of and for our times.

Wendy, thank you for your kind comments, and for sharing your aleatoric and community music-making ideas. We hope you find the new Out of Time books/works useful in your performances, and that you can continue to make music during this difficult time of lock-downs.