When Tall Poppies records are being prepared, Belinda Webster usually sits in the producer's chair - as well as wearing a number of other hats to do with running a record company. The new Sandy Evans album Rockpoolmirror is a little bit different for her, as on this occasion she had an additional creative role: the rock pools of the title are those captured in Belinda's nature photography - the inspiration behind Evans's music.

Sandy Evans's new album Rockpoomirror is something quite special on several levels. It came about because a generous patron offered to fund the recording of this project. Sandy Evans wrote all the music and performed it in duos with some of her special musical colleagues over the years: Satsuki Odamura (koto); Bobby Singh (tabla); Steve Elphick (bass); Alon Ilsar (drums and electronics) and Adrian Sherriff (bass trombone). 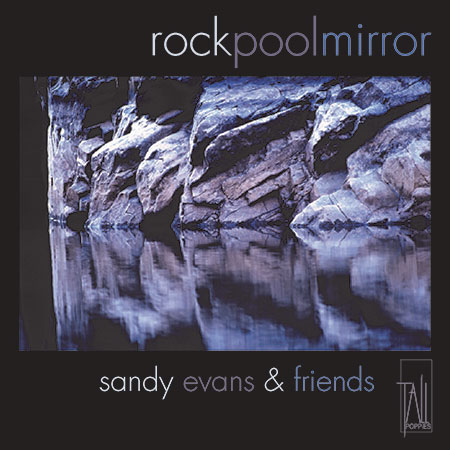 All the works were inspired by a series of my photographs taken in the early 2000s in the Shoalhaven Gorge at dawn. The rocky cliffs of the Gorge plunge to the water in many places and create a dramatic landscape. Elsewhere, the mirror-like surface produces some ghostly images from the reflections at the water's edge. Sandy had one of these pictures at her home after an exhibition in Sydney and she seemed to like it! (All the photos are reproduced in the CD booklet.)

A new CD is a rare event these days, but for a new disc to have two launches in two different cities is even rarer. Rockpoolmirror was launched last month in Melbourne and this month (July) in Sydney. The Melbourne launch took place at the Salon, in the Melbourne Recital Centre. Mostly Melbourne players were required so Paul Grabowsky (piano) and Niko Schauble (drums) joined Sandy Evans (saxophones) and Adrian Sherriff (bass trombone) to present the works written for this CD.

At the Melbourne launch Paul and Niko showed what amazing music can be made between musicians who know each other really well. Hearing them play was like being privy to a special conversation. It was a seamless and generous performance: the hour of music sped past in a flash, helped along by the projection of the photos behind the performers. 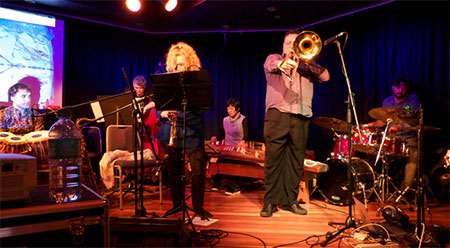 The Sydney launch was presented by all the musicians on the disc, apart from Steve Elphick who was truck-driving at the time. The Sound Lounge at the Seymour Centre was packed and SIMA would have been pleased with the turn-out. An observer would have been pressed to notice that this ensemble of players had never performed together before. The musical interplay was remarkable and, as in Melbourne, the hour of music sped by. The audience seemed to be completely engrossed and many offered very positive feedback afterwards. Alon Ilsar's invention, 'the airsticks', were used by him to create a swirling wall of sound whilst he looked for all the world like he was doing tai chi. It felt like a theremin on acid. It was a very effective part of the improvisation through the evening.

I personally found the whole event, from the recording to the two launches, a very humbling experience in that I'd never imagined that such amazing music could be kick-started by my images. Sandy Evans has written a suite of extraordinary music that seems to reflect many of the ideas in the pictures.