Ros Bandt recently returned from Europe where she had been living from 2010 to 2011, touring and performing her original sound art and collaborating with European artists. One of these collaborations is Sonic Blue Red Tracings - Kami, a sound art performance created with long-time colleague and artist Johannes S Sistermanns from Germany. They developed their hair-dye sound painting in Wakayama, Japan, and it premiered in 2010 in the Tube (Munich), the Moltkerei (Cologne) and Brig (Switzerland). This third collaboration of theirs has just been released on CD by the German artist.cd Wergo label (see: CD details in the AMC catalogue and the the Wergo website). The CD was launched on 24 February 2012 at the Grainger Museum in Australia, the site of their first satellite link performance 15 years ago. 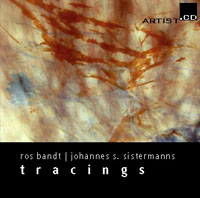 Ros Bandt is an international Australian composer, sound artist and scholar, creating sonic archaeologies from the new and the old. Her consideration of cultural identity and place in her soundscape and installation design is evident, and her attention towards minimising the impact of performance on environment is exemplary. Ros Bandt has created her sound works in varied settings, from Ise Bay, in the Shima region of Japan - where she recorded the female abalone divers - to Lake Cootharaba, a setting for her more recent work Blue Gold Floating Land. Bandt has received much recognition and awards for her innovative work in Australia and overseas, and, in 1990, was the first woman to receive the Don Banks Award. Her thesis explored John Cage's ideas on chance and indeterminacy in music, and her doctorate was on the performance practice of repetitive music.

Johannes S Sistermanns, a long-term collaborator of Bandt's, is an electroacoustic composer and scholar whose ability to realise abstract ideas in the physical plane of the performance space is notable. The philosophies underpinning his work can be viewed and heard in his Sound Plastic and radio art pieces. He regularly performs at international festivals, and has completed several artist residencies which have taken him to Japan, Australia, America and Europe. Sistermanns has studied at the New Music Theatre with Mauricio Kagel, was taught classical Indian singing by Professor Djutishi Benares, and has a doctorate in musicology. He currently lectures at the International Summer Courses for New Music in Darmstadt, Germany.

Ros Bandt and Johannes S. Sistermanns's first encounter was at the Zeitgleich symposium at Mutters, Austria, in 1994, where Ros was commissioned to install her multi-channel installation Pillars of Memory. This meeting sparked an artistic partnership built on the creative possibilities of cross-cultural exchange and conceptual sound art performance. Together they have created a sonic journey of composition, improvisation, collaboration and trust which continues to push boundaries and evolve. The essential elements of all their work together is an intersection of sound, space, time, movement and colour - all these elements constantly transforming in relation to one another (Bandt & Sistermanns: interview 25 February 2012)

The new CD Tracings captures significant moments of sonic collaboration by the two artists. Their conceptual work encourages us to experience fully the present moment of sound in acoustic space; this perspective on performance can challenge and invigorate audience expectation. Each work is underpinned by the artist's scholarship and philosophical outlook, reflected in the rigorous design.

Four collaborative works featured on the Tracings CD are:

The inaugural collaborative performance by Bandt and Sistermanns was held 15 years ago at the Grainger Museum as part of 'Many Faces of Percy Grainger' for the Melbourne International Festival of the Arts. A Global Garden for Percy was a live improvised performance by satellite ISDN link, technically managed by Jim Atkins from the ABC between Melbourne and Frankfurt, joining two places of significance in Percy Grainger's life.

The two artists were connected by the latest international communications network of its day, interacting simultaneously - Bandt in Melbourne's Grainger Museum, which Percy designed, and Sistermanns in Frankfurt at the site where Percy first formulated his ideas about Free Music. They were making a sonic bridge, performing and sending sounds, prepared and spontaneous, across the world in real time.

In 2008, Ros Bandt and Johannes Sistermanns were artists in residence in the multi-storey Forte skyscraper in Wakayama, Japan where they investigated 'changing identities' and 'cross-cultural influences' in a distant setting. It is here they conceived the creative direction for their later Sonic Blue Red Tracings performances in Europe in 2009-2011. The colours of their hair dye, (blue for Johannes and red for Ros) are symbolic of their cultural differences and engagement. Through their movements, red and blue marks became elaborately layered and amplified sonic notations, suspended and installed through the space. With their whole bodies they investigated the relationships between sound and paper, painting sound structures by whipping their hair across unrolled sheets of Japanese paper, studded with microphones. (It was during their time in Japan that they discovered that the words for hair and paper sound the same in Japanese, kami.) 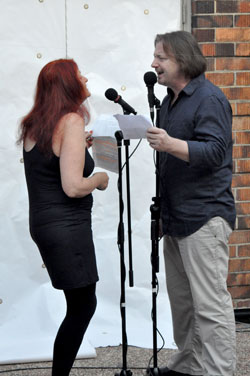 On a hot summer evening of over thirty degrees, Bandt and Sistermanns performed two pieces to a packed house: the bilingual duet Whisper Between Stars (for a video of the performance, see Youtube) and a new, dry version of Sonic Blue Red Tracings, specifically designed for the museum (see also: Youtube video).

The paper doors with piezos and the orange circular brick wall of the museum created a backdrop for the artists, as they whispered into microphones repeating the words and phrases contained in Percy Grainger's 1938 Free Music statement. Jim Atkins's expert technical sound set-up ensured the electroacoustic soundtrack was in place to create a foundation for the artists to experiment with their voices, to recreate the sliding glissando and engagement of free music, advocated by Percy. The rise and fall of the intensity of their voices, overlapping and complementing each other, was matched by the emotion generated, and the expressiveness of body and gesture.

Hand-painted kami flags had been placed at either end of the courtyard stage, with boldly stated blue and red in Japanese characters in colours to match. With meditative patience and care, the artists started unfurling rolls of opaque Japanese paper, and opened paper books, chaotically patterned with blue and red hair dye from an earlier action-painting improvisation. Ros Bandt describes these books as providing insight into the artists' exchanges, the journey of moving through sound space and image, creating new landscapes and visual and sonic terrains. (Bandt 2008) 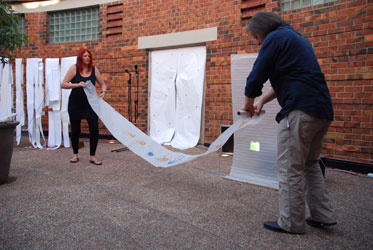 The amplified paper reverberated with the caress and whip of their dry hair - with energetic flourishes of luminous red (Bandt) and evenness and calm, dark with a touch of blue (Sistermanns). Intriguingly, when a roll of paper or book was no longer required, it was transformed into an instrument, releasing its innate audio qualities by either gentle shaking or focused blowing.

When in use, these painted artefacts simultaneously connected the artists and obscured them from each other and from the audience, creating a dual sense of revelation and mystery - a constant theme in this performance.

The double doors were covered in paper and studded with piezos which transferred prepared sounds through the paper, like speakers. These piezos and the eight tiny microphones suspended on the tall freestanding paper sculpture, provided strong audiovisual presence. Sistermanns adjusted the paper implanted with the piezos almost disappearing into the interior space behind the door. Bandt's active sonic engagement behind the paper sound sculpture could fleetingly be seen from between the paper slats.

Together they built upon the Sonic Blue Red Tracings, creating a new electroacoustic composition, enhanced by Atkins's sensitive interaction from the mixing desk, spreading the sound around the courtyard through four speakers and a subwoofer. 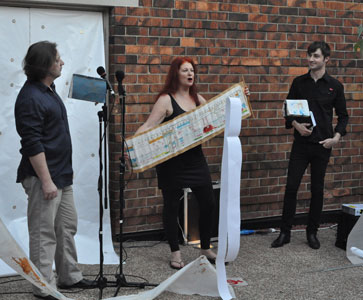 The dry rendering of Sonic Blue Red Tracings may derive from the action painting presented in their European performances without the hair dye. The artists, however, stress the importance of their solo contributions, the uniqueness of each performance and the unpredictability of what each artist will do at a particular moment.

The colour notation score, hanging patiently on its easel waiting for its moment to be brought to life, created a direct link back to their inaugural performance of A Global Garden for Percy. A living artwork in its own right, with its pictorial depiction of sound and colour choreography, it had provided Bandt and Sistermanns with a guide for their original global collaboration in 1997. Now it was reinvigorated as a cultural reference, becoming an improvised musical instrument at the conclusion of the show.

ABC broadcaster Julian Day launched the CD and noted the appropriateness of the setting for these two 'freethinking artists' in the home of free music. A special acknowledgement and thank you to Suzanne Bravery and Brian Allison (Grainger Museum), for hosting and facilitating this historic event.

Ros Bandt & Johannes Sistermanns were interviewed for the article by Melinda Barrie (25 February 2012).


Whispering Between Stars - performance at the Grainger Museum, 24 February 2012

Melinda Barrie is a Melbourne-based archivist, working for one of Australia’s leading universities. Her research interest has to do with intersections between industry and community, and she has written and presented extensively on the topic, including curation of an exhibition on car culture. In addition she has a practical involvement and interest in the significance of Australia’s audiovisual heritage. Barrie is currently editor of the Australasian Sound Recording Association’s (ASRA) journal Sound Archive. She is also studying for her Master's in Cultural Heritage at Deakin University.