The Aspirations of Daise Morrow

A conversation between words, music and space

The four musicians of Zephyr Quartet have taken on a composing role in a theatre adaptation (10-24 October, Adelaide) of a Patrick White short story. Cellist Hilary Kleinig explains.

25 years after the death of one of Australia's most lauded writers, Patrick White, Adelaide-based theatre company Brink Productions mounts The Aspirations of Daise Morrow, a staged adaptation of White's short story 'Down at the Dump'. This uniquely Australian literary work is rich in its imagery of characters, time and space, and makes us question the conventions of society, of right and wrong, and what constitutes a good and fulfilling life. (Read short the story in full.)

In Brink's production four actors and four musicians/composers weave words, music and movement together, in a space shared with an audience who are arranged in a mandala-type configuration. Rather than turning White's story into a script, the four actors play various characters within the story, often narrating their own thoughts and actions.

It is into this world that Zephyr Quartet has been thrown. While Belinda Gehlert (violinist) and I have been involved in writing and performing for theatre before and, along with Emily Tulloch (violinist), have written music for Zephyr to play, this is the first time our violist Jason Thomas will join us in this joint compositional process. It is also the first time Zephyr, as a unit, has written for theatre. 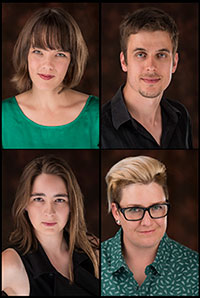 As a starting point we each approached the story independently. Each came to the development with a handful of sketches. We focused both on broader ideas, such as the essence of a character, and on minute ideas, such as using some of White's rich language from the story for impetus, as in the case of the expression 'frozen fireworks'. Some of the music has been composed to be more cellular and flexible, and some has a longer, through-composed form. When we pooled our sketches together, we arrived at about 45 minutes of music of varying character, style and scope. When we played those preliminary sketches to the cast, the production's director, Chris Drummond, remarked upon how 'cohesive the music was, despite being written by four different people'. It seems as an ensemble we share a similar, cohesive sensibility - thankfully!

As I write this in early September, we have commenced our rehearsal period with the four actors before The Aspirations of Daise Morrow has its world premiere season at Adelaide Festival Centre's Space Theatre on 10-24 October. Together with Chris Drummond we are weaving those initial musical fragments into the fabric of White's story. I believe Chris is fairly unique in the theatre world in that he always strives for an end result in which the musical integrity is not at all compromised, believing the story telling is best served by a musical score that can stand alone artistically.

This production will not be your typical theatre experience. Whilst the world of 'Daise' will be rich in aesthetic and texture, there will be a limited amount of props and lighting states. There will be no set changes to mark shifts in location within the story, no costume changes to mark the actors' often-swift transitions from one character to another. These tools of the theatre - that often play such an important part in the storytelling - unconventionally take a secondary role to the music and the onstage presence of the quartet. This unique approach leaves us, the composers and performers, with some intriguing questions. How do we create 'a smell of sink sprayed out of grey, unpainted weatherboard, to oppose the stench of crushed boggabri and cotton pear' out of sound? How do we guide the audience to understand a change in location or to understand that one actor is playing two characters?

What fascinates me about this type of work is that the performance will be an intimate conversation between words, music and space. Each of these three elements plays an equally important part in the storytelling. Due to the close proximity of the performers to the audience, the experience of each audience member will be different. Depending where you are seated, you might find yourself sitting near an actor, having a musician pass you or perhaps sit down next to you. Each audience member will see and hear a different show, and this is an experience you can't replicate on a video or a recording.

Over the final weeks of rehearsal, the puzzle of actors and words, musicians and sound, will organically come together. While it is both exciting and scary that, right now, we don't know exactly where we will end up by the time the season officially commences, I know that this is a timeless Australian story with universal themes, rich characters and hauntingly real landscapes, and that The Aspirations of Daise Morrow will be a unique and intimate experience for us as performers, as well as for the audience.

Zephyr Quartet's founder, cellist Hilary Kleinig is the musical director of The Aspirations of Daise Morrow.