I first performed Larry Sitsky's Sonata for solo flute (1959) in my final BMus recital at the Sydney Conservatorium. Exactly thirty years later I recorded it for broadcast on the ABC.

I don't remember much of my exam performance thirty years ago except that it was very nervous, fast, splashy, and 'instinctual' rather than considered. Interpretation in repertoire for wind instruments was not much talked about, in my experience. Indeed, I got the impression that interpretation was the realm of pianists and string players, those who dealt with the Great Repertoire. It seemed that all that was expected of a wind player was to 'get the notes', in tune and in time.

I hope that these old hierarchies have long since disappeared. Certainly interpretation has always interested me, though there was little written about it outside of baroque repertoire until recently.

The interpretative process is quite an arcane, personal, and case-by-case business. Consequently, interpretations, once arrived at, are tightly held (a sort of modern day philosopher's stone). Though according to the Society for Music Theory, there is 'burgeoning interest in analysis and performance 1.

Analysis for performance needs to reveal information which is useful to a performer, as distinct from other types of analysis which are more commonly concerned with form, key, development of themes, how notes are generated, rhythmic permutations, etc. Sometimes an overload of information on the page (dynamics, attack, vibrato shaping) can make it particularly hard to perceive the underlying trends - you can get lost in the detail. A type of analysis which can peel away the surface detail, revealing the deeper structure of a work, is ideal here, allowing the performer to 'play in order to reveal'.

Larry Sitsky's first Sonata for solo flute, being a very substantial and detailed work, was fertile ground for this type of analysis. One of the analysis for performance models that I have developed I call 'melodic analysis' or a 'songline analysis' (yes, a passing reference to Bruce Chatwin there). It outlines the salient melodic framework of a piece. 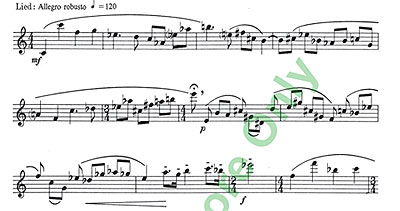 For example, regarding melody in Sitsky's Sonata, each section has a different tonal focus. The melodic framework is created through moving away from the home base towards other tonal focusses, and finally back to the home tonal focus (obviously this is described in a very reductionist way). To give a brief example, in the first 12 bars of the Sonata the melodic framework is delineated by the opening Cs up to F in the third register, with the trajectory being complicated by an E flat/E natural discourse along the way. The E flats and E naturals finally cede to the opening theme played in F this time at bar 12. This trajectory is reversed in the final 5 bars of the movement.

While I feel that this type of analysis has allowed me to gain insight into the Sonata on a deeper level, I'm not proposing that planning and analysis are the ne plus ultra of performance. Spontaneity is still high on my list too! However, it is my perception that having a deeper understanding of the long-term structures in a work can free you up, and allow you to 'play' with the fleeting colours and groups of pitches which speak to you on an instinctual, subliminal level: to unleash your aural imagination.

The second most obvious development for me, over the thirty years, is that I have long ago abandoned all my received influences from the French school, except when playing French 20th-century repertoire. All flute players will know what I'm talking about here - elongating the first notes of runs, using heavy détaché articulation, and playing with rapid, even vibrato throughout.

Sitsky's Sonata has a lot in common with the Bartók Sonata for solo violin, and almost nothing to do with French music. The instantly recognisable French performance traits, while working magic in the right piece, produce a uniformity of sound which is often considered a positive (in that repertoire). Contemporary solo repertoire, on the other hand, begs to be given voice through multifarious expressive and colouristic devices, some of which are applicable equally to traditional repertoire (like the hollow sound/dark sound opposites), and some of which are not (coloured air sounds, explosive tonguing effects, etc.). The flute player's tonal palette is still endlessly evolving.

There is a final external difference that has developed over the last thirty years, and that lies in the flutes that are now available. When I did my final exam at the Sydney Conservatorium, I played an in-line silver flute, with terrible intonation in the low register (very flat) and a host of other out-of-tune notes to be brought under control. The headjoint was 'designer' but very unresponsive compared to what is available currently. As for the in-line nature of professional flutes back then, I don't know why I stuck with that system for so long when it is so clearly designed for large hands and long fingers, and I don't have either of those.

Flute players are spoilt for choice now, and, the high Australian dollar at the moment means that good flutes are more affordable than ever before. The optional extra of a C# trill is a benefit in contemporary repertoire. However, these instrument-based observations are really a side issue, as the point of this exercise is a personal one for me, an internal journey.

By way of signing off, I'd like to thank everyone at the Australian Music Unit of the ABC for their support of this recording project (Sitsky Sonatas no.s 1 and 2, Vincent Plush Chu no mai, and Takemitsu's Voice). Broadcast details (on New Music Up Late, later in 2013) have not yet been confirmed.

Laura Chislett Jones has searched the world for the most exciting flute repertoire, both old and new. She has championed contemporary music by Australian composers through performances and recordings on radio, CD, and for mp3 download, as well as recording international repertoire from Bach through to Boulanger, Ferneyhough, Vali, Weddington and beyond.

This is a very interesting perspective, thankyou