'.... finding whatever is beautiful enough to give life meaning. Grace, beauty, harmony, intensity.' (from 'The Elegance of the Hedgehog' by Muriel Barbery) 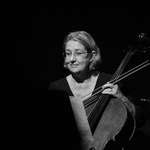 Cathy Applegate was born in 1959 and grew up in Melbourne. She was fortunate to have a family and an educational environment that fostered a great love of the arts. She studied piano and music theory with private teachers to an advanced level during her school years.

After leaving school, Applegate went on to study medicine at Monash University and now works part-time in General Practice. Literature and music have always remained central passions in her life.

In 1982, the call of the warmth and the vibrancy of the tropics resulted in a move to Darwin in Australia's far north. Applegate plays cello with the Darwin Symphony Orchestra and is actively involved in the lively Darwin chamber music scene. She has had many opportunities to have compositions performed in Darwin, largely through the support of the Darwin Symphony Orchestra, the wider Darwin community and the Music Department at the Charles Darwin University.

Applegate's first major work was The Wetlands Suite, composed for the Darwin Youth Orchestra and Centre for Youth Music singers, CDU. The work was first performed in Darwin in November 1997, and later in the same month for the Tiwi Aboriginal people at Bathurst Island. The work has also had several performances by the Darwin Symphony Orchestra and the DSO recorded the Suite in 1999.

In 1998, The Wetlands Suite for the Darwin Youth Orchestra received an Honourable Mention in the CACS National Awards for 'An Outstanding Contribution to Australian Culture'.

Applegate has written two full-length musicals (libretto and score): Felicity and the Bunyip (2000), and A Gecko's Tale (2004). The latter is a musical satire dealing with current issues surrounding refugees and asylum seekers. Both were premiered by the Charles Darwin University to great acclaim. Many of the songs from these musicals have had subsequent performances.

In September 2009, her work WindRose was performed by the DSO. This is a 35-minute work commissioned by the DSO and is based on an edited version of the epic poem by poet/artist Magda Palmer. WindRose probably qualifies for the broadest definitions of opera and includes dramatic narration and song. The premiere performance was directed by Kathy Banks and conducted by Dr Martin Jarvis. Aerial puppetry was used with great effectiveness.

In February, 2010, Applegate's work Pipeline was premiered by the DSO. This is a 10-minute orchestral work commissioned by the APA Group - Managing Director Mick McCormack - to celebrate the building of the Bonaparte Gas Pipeline into Darwin. The work has been recorded by the DSO.

Applegate has had a work for orchestra and narrator, Fourteen Lines, performed by the DSO in Alice Springs and in Darwin under the baton of Dr Leif Sundstrup. This is a 10-minute suite inspired by seven of Shakespeare's sonnets. The sonnets were chosen by the then adminstrator of the Northern Territory, His Honour Tom Pauling, who also read the sonnets for the concerts. There are smaller ensemble versions of several of the sonnets also available.

Applegate was the concert convenor for Australian Doctor's Orchestra's debut concert in Darwin in June 2016. This is an orchestra with about 100 members, so it was a massive undertaking. Over $20,000 was raised for a local charity. Applegate composed a work that functioned as an overture for the event - it takes its name from a neurological term meaning difficulty with rapidly repeated movements: Dysdiadochokinesis.

Saudades, a major piano work in three movements and commissioned by pianist, James Teh, was premiered in October, 2016 at the Charles Darwin University. The ballet The Brolga and the Star was premiered to much acclaim in Darwin in November, 2016 with a live orchestra conducted by Martin Jarvis.

Her compositional styles are eclectic. She has composed numerous other works for individual soloists and ensembles. She has also has increasingly been involved in arranging and transcribing musical works. Several of her compositions have been performed in Asia and in Europe.

Applegate, in her capacity as an author, has had childrens novels and picture books published both in Australia and in America. Her picture book, Rain Dance, was shortlisted in the Children's Book Council Awards for Picture Book of the Year in 2001. Her novel Red Sand, Blue Sky has been reprinted many times and has been used as part of school and university curriculum.