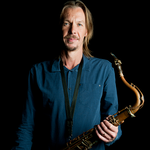 A founding member of Topology, John studied saxophone at the Queensland Conservatorium Of Music, graduating with a Diploma in Jazz in 1987. He has been performing and teaching for over 30 years, has toured Australia, Europe, the US, Canada, India, Singapore and Indonesia, released 16 albums by Australian and international composers, and his compositions have been played on radio and television worldwide. Babbage is a sought-after cross art form composer with commissions for works such as R&J (Expressions Dance Company), Argus (Dead Puppet Society) and Ocean's Skin (Heidi Duckler Dance Theatre, USA). He has recorded and performed with the above groups as well as Terry Riley (USA), the Brodsky Quartet (UK), Abhinaya Theatre Company (India), Kate Miller-Heidke, The Kransky Sisters, Christine Anu, Megan Washington, Electric Fields, Trichotomy, TaikOz, William Barton, Katie Noonan, Grant Collins and many more.

Babbage is also a driving force in Topology's Top Up education and community engagement program and is actively sought after by teachers around the country to deliver improvisation and composition workshops. His work for Top Up has brought him to numerous communities in regional Queensland, Northern Territory, New South Wales and Victoria.