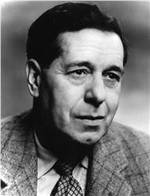 Born in Sydney in 1893, Arthur Benjamin grew up in Brisbane. He travelled to Britain in 1911 as the recipient of a scholarship to attend the Royal College of Music, where he studied with Charles Villiers Stanford until the outbreak of World War I in 1914. Benjamin enlisted to serve in the infantry, but later transferred to the airforce and became a gunner with the Royal Flying Corps. Shot down over Germany in July, 1918, he was taken prisoner and spent the rest of the war writing music in a German prison camp.

At the war's end Benjamin returned to Australia at the invitation of Henri Verbrugghen to take up a position as Professor of Pianoforte at the NSW State Conservatorium of Music. He remained in Australia for only two years, however, and in 1921 returned to England, where he concentrated on his performance career. He made his first concert appearance in London with Sir Henry Wood in 1925, having spent the previous four years practising intensively. He was also composing during this period and in 1924 won the Carnegie Award for his Pastoral Fantasy for string quartet.

He accepted a position at the Royal College of Music in 1926, where his students of piano included Benjamin Britten, Peggy Glanville-Hicks and Miriam Hyde. In 1938, however, he resigned and moved to Vancouver, where in 1941 he was engaged to conduct the new Canadian Broadcasting Corporation Symphony Orchestra. In 1944-45 he also held the position of lecturer at Reed College, Portland, Oregon. Returning to Britain, he resumed his position at the RCM, where he remained until 1953.

Benjamin received a number of prizes for his compositions, including the British Arts Council Prize of 1951, the Festival of Britain Opera Competition Prize (1953) and the Cobbett Medal (1960). He wrote numerous 'serious' compositions, including several operas, orchestral works, a harmonica concerto (premiered by Larry Adler), vocal and chamber music, and also had a great commercial success with his Jamaican Rumba (1938).

Book: The Australian symphony from Federation to 1960 / Rhoderick McNeill.

- Document: Arthur Benjamin - Divertimento on themes of Gluck for oboe and string orchestra