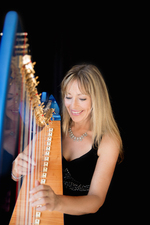 Kim Cannan is a well-known instrumentalist and composer. Born in Sydney, Kim began her classical guitar training at a music school in Parramatta in 1977.

As a professional player, Kim had to expand her repertoire to include several genres to facilitate her working career. She released her first instrumental album Intrinsic in 2000. Tracks were immediately broadcast nationally and globally.

In 2004 Kim was awarded the Frank Streather professional development award for her work at the Central Coast Conservatorium. She was then responsible for composing, arranging, engineering and performing on her album Lullaby. This album was produced for children and includes original and well-known lullabies. As part of the award, Kim developed 'Sonic Healing Environment' which is a series of music workshops for wellbeing tailored to various community groups.

Currently, Kim has released four original instrumental albums. Her blend of stringed instruments both old and new with various world cultures make these albums a delight to listen to. Tracks from all CDs have been broadcast on various media including ABC National Radio, BBC UK and UCB radio UK.

These works are also available digitally, and Kim has arranged several for small ensembles.

Her passion for music to 'sooth the soul' has caused her to combine music education with music based therapies and research.