Taran Carter has been writing music since he realised that to be a pop star you either had to look good, sound good or write nice tunes. He chose the latter. 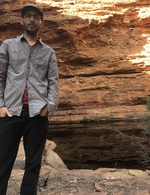 Taran Carter's music has been described as having a 'quasi-populist vocabulary', 'a distinctive compositional voice, precociously adept at orchestration and form', and as 'not compromising in terms of inventiveness'. He has written music for orchestras and wind bands, a short opera, several musicals, two concerti (percussion & flute), various chamber works, pop songs, educational works and two songs to which the Australian synchronised swimming team performed at the 2000 Sydney Olympic Games.

Other highlights in Taran's career include the sold-out premiere season of his first opera, Busking Hugs, (commissioned by Opera Australia) in 2001 and the Melbourne Symphony Orchestra commission and premiere of Moondani Music in 2004, earning him the reputation of 'a name to watch'.

Taran's music has been performed by other various ensembles including Synergy Percussion, Speak Percussion, EnsembleBASH, The Song Company, Romp Duo and the Percy Grainger Wind Symphony, as well as self-directed ensembles, most notably Tehai.

Taran studied composition at the Victorian College of the Arts, in Melbourne, under the tutelage of Mark Pollard, Julian Yu, Johanna Selleck and Stuart Greenbaum. He has a keen interest in music education and has created many works for student ensembles and as etudes; subsequently had several works included on the AMEB and ABRSM syllabi. It was as a school teacher that Taran met the author Scott Hatcher with whom he has since written several musical theatre works, including Sanctuary Springs, H2Oh! and Odes to the Baglady in A minor.

In 2013 Taran was commissioned by the City of Melbourne to compose a work for the Melbourne Town Hall organ and six percussion. The result was a work called Mixed Precipitation which was performed to acclaim by Brendon Lukin and Synergy Percussion in late 2013.

Taran has composed a musical adaptation of Animal Farm co-written with one of Australia's most loved authors, John Marsden. It was premiered in December 2016 in Kyneton, Victoria. In 2017 Marsden and Carter premiered their second stage show together, Marco Polo.

More recently Taran completed his second opera, Mau Mau, a student Musical called Game Of Shows and the score to a Circus production entitled The Cartographer's Dream. In 2020 during Melbourne's COVID-19 lockdown Taran focused his energy on student music for wind instruments, most notably the three collections Unaccompanied minors and majors, Geography of the clarinet and Tesselétudes.