Jenna Cave composer and arranger, bandleader and conductor, and saxophonist. She composes music for large and small jazz ensembles with varying degrees of improvisation, as well as fully notated chamber music, cross-over works and songs. 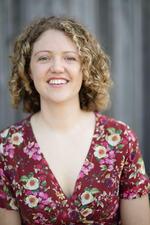 Jenna Cave (b.1984) is an Australian composer and arranger, bandleader and conductor, and saxophonist who is most known for her large ensemble contemporary jazz music. Her music has been performed, broadcast and warmly reviewed around Australia and internationally. The award-winning composer from Canberra studied pre-tertiary and undergrad jazz at the Australian National University, and completed a Master of Music (composition) at the Sydney Conservatorium.

She has lead the 18-piece Divergence Jazz Orchestra in Sydney as resident composer and conductor since 2012. Cave produced and released their two critically acclaimed albums Fake it Until You Make It (2016) and The Opening Statement (2013), and they have performed at major Australian jazz festivals, underground venues, in concert series, many of their own shows at jazz venues. They have collaborated with Australian jazz luminaries Judy Bailey, Miroslav Bukovsky and Paul Cutlan; showcased the music of emerging and younger musicians, and shone a light on the outstanding improvisational and compositional talents within the orchestra.

Cave works with other groups in collaborations (recent projects include quintet The Truth Seekers and improvised duo For This Moment). In the last 9 years Cave has been commissioned to write music by international jazz festivals and ensembles, highlights include two works for the Sydney Women's Jazz Collective (featuring Sandy Evans) for premiere at the 2016 Sydney International Women's Jazz Festival, a piece for sextet (featuring Norwegian saxophonist Froy Aagre and Australian luminaries Andrea Keller and Shannon Barnett) for the 2010 Melbourne International Women's Jazz Festival, and a 2019 commission for Paul Cutlan's String Project.

Her works for string quartet and string orchestra have been performed internationally in NYC (Yates String) and in St Petersburg (string orchestra Warm and Peace (Cond. Hoshimi Sakai). She has also been commissioned to compose for the screen, and 2015 Cave was awarded full composer representation with the Australian Music Centre. In 2019 Cave was one of 17 jazz musicians nominated nationally for the prestigious Freedman Fellowship.

"Cave has established herself as a top-level composer, arranger and conductor in Australian jazz" - John McBeath, The Australian

"Cave writes with depth and maturity well beyond her years" - Jack Bowers, All About Jazz