Making music is about making connections with audiences and other musicians. For me, making music and composing music is a way to create a portal or door into a sound world peopled with creatures, landscapes and literature transformed into musical ideas. 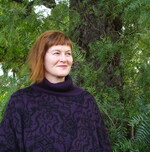 Meredith resides in Melbourne, after having spent a long stint in the USA, living there for nearly twenty years.

Her compositions are influenced by her ties to multiple cultures, and her search to understand her Australian identity.

Her compositions often feature guitar as she is trained as a guitarist but loves writing for ensembles and particularly enjoys a collaborative approach to work closely with ensembles to explore and exploit their strengths.