Jonathan Dimond (b. 1971, Wales, UK) composes music that is rhythmically charged, and formed with an aesthetic that brings together the worlds of Western classical, jazz and intercultural musics. 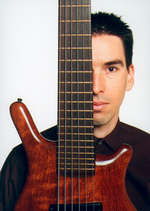 Jonathan Dimond has seen composition as an essential element of his musical development from a young age. He formed and led ensembles whose goal was to create and perform contemporary music that incorporated jazz, improvisation and composition in an original manner. His performances and recordings with the Brisbane-based ensembles Artisans Workshop, Loops, and Contemporary Focus, for which Dimond wrote extensively, illustrate this focus.

His formal musical education includes: PhD in Composition (University of Queensland, 2019); Master of Music (2006) and Post Graduate Diploma of Music (1995) from the New England Conservatory, USA; Bachelor of Music from the Queensland Conservatorium, Griffith University (1992); Graduate Diploma of Vocational Education and Training Practice (2010) and Certificate IV in Training and Assessment Teaching (2007) from Box Hill Institute.

An important facet of Dimond's work is in the area of education, through his involvement in University music education since 1996. Dimond is currently senior lecturer and head of program at Melbourne Polytechnic, where he runs the Bachelor of Music degree. He also ran the Bachelor of Music (Jazz) at the Queensland Conservatorium, Griffith University, from 1997 prior to returning to the USA in 2002.

Jonathan Dimond has explored the field of speech-melody, and has used recorded speech as the driving inspiration and chief organising factor in many of his compositions, including Spare Change, and Airwaves: 100 Years of Radio (co-written with fellow artist Robert Davidson).

Jonathan Dimond is a multi-instrumentalist, with extensive professional performance on trombone, tabla and electric bass guitar. Dimond performs many of his original compositions with his current ensemble Tripataka.

Jonathan Dimond — current to May 2021