Behind the material world is a deeper world of inspiration, mathematics, spiritual beings and psychological archetypes; a living, breathing reality of invisibility. Composing is the means by which I swim through this sea of complex activity, trying to understand what influences human, animal and mineral evolution. 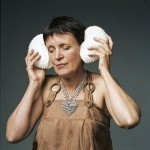 She composed The Aspern Papers, an opera based upon a short story by Henry James with a libretto by David Malouf. Her orchestral music has been performed by the National Symphony of Thailand (Buddha on Mars) and the Philippine Philharmonic Orchestra, conducted by Josefino Chino Toledo (Approaching Venice). Her music has incorporated the non-musical mathematics of the coastal architecture of Andrea Palladio (The Aspern Papers), and modernist architects Jørn Utzon (Sydney Opera House, a piano concerto performed by Michael Kieran Harvey), WoodMarsh Architects (Butterfly Modernism for piano quintet) and Chancellor and Patrick (The Butterfly House for piano quintet).

Her involvement in South East Asia since 1995 has been pivotal in the development of her Australian voice. Her music has been performed at the Asian Composers' League Conference and Festivals in Taiwan (1998 & 2015), Thailand (2002 & 1995), the Philippines (2015 & 1997), Israel (2004), Korea (2009 & 2002), Vietnam (2016) and at the 1999 ISCM Festival (Romania), Asian Music Week (Japan), International Week of New Music (Bucharest, Romania), Meetings of New Music (Braila, Romania), the Virginia Woolf International Seminar (Colorado, USA), Music of the Whole World Festival (Switzerland) and the IAWM Festival (Korea). She has been an Executive Committee of the Asian Composers League and Chair of the Melbourne Composers League.

She was commissioned for the Joseph Beuys & Rudolf Steiner: Imagination, Inspiration and Intuition at the National Gallery of Victoria. Her environmental music Dredge with photographer Siri Hayes was commissioned by Arts Victoria.