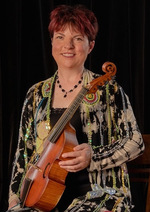 Brooke Green has been studying and performing Medieval, Renaissance and Baroque music for many years and this is the springboard for much of her music. As artistic director of the soprano and viol consort Josie and the Emeralds, she usually composes for their programs but has also arranged her works for modern instrumental ensembles.

Recordings can be found on josieandtheemeralds.com and The Emerald Leopard (Tall Poppies TP233).

Brooke has written several works in reaction to the ill-treatment of refugees. Reza Barati has been performed in different arrangements, with repeat performances featuring bass viol, cello or tenor saxophone.

Brooke is the recipient of the 2019 Jonathan Blakeman National Composition Prize and a winner of the Viola da Gamba Society of America's Traynor Competition for New Viol Music.

Brooke was commissioned by The Art Gallery of NSW while curating and performing in the concert series Music in this Stillness. In 2019, Brooke collaborated with musicians from The Night Watch to give a concert of her music in Wellington, New Zealand. The Spirit of Daphne for solo bass viol was commissioned by Laura Vaughan. In 2022, Brooke was Guest Artistic Director, performer and composer with the Arafura Music Collective, Darwin. Brooke is published by PRB Music

Brooke is a graduate of the University of Sydney Music Department where she was awarded the Donald Peart Prize as an outstanding student in musicology, composition and performance. With a Queen Elizabeth Silver Jubilee Scholarship, she studied baroque violin at Royal Conservatory, The Hague and in London with Michaela Comberti. For several years Brooke played baroque and classical violin with London-based ensembles such as The Hanover Band and The Brandenburg Consort while researching and performing music by early women composers such as Elisabeth-Claude Jacquet de la Guerre. In 2010, after studying viol and vielle with Wendy Gillespie, Brooke graduated with a Masters in Early Music Performance from the Historical Performance Institute, Bloomington, Indiana University where she also was a performer of contemporary music on historical instruments.