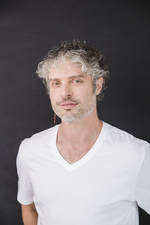 Tim Hansen is a performer, composer, theatre-maker and teaching artist. Classically trained with a theatrical bent, Hansen works confidently in classical music, cabaret, music theatre, and songwriting, as well as acting, writing and producing theatre, and community festivals and events.

Hansen is a passionate believer in the arts as a means to address issues of social justice, and has worked with organisations such as Milk Crate Theatre and Shopfront to do so. By giving artistic access and therefore a voice to segments of the community that are forced into invisibility, such as those who have experienced homelessness, discrimination, or stigmatism due to mental health issues, Hansen believes we can make steps towards healing those wounds and move forward as a society to address larger issues that affect us all, such as wealth inequality and climate change.

A core component of Hansen's practice is engaging with young people, and he believes that access to music education and artistic expression is a fundamental right of every young person. He is currently engaged with Musica Viva as part of their "Musician in the Classroom" program, where he works with teachers in a socio-economically disadvantaged primary school, teaching them how to teach music to their students. He was composer in residence at Santa Sabina College for seven years, and has tutored with a number of youth-arts organisations around Australia including Australian Theatre for Young People, Music for Everyone, and Canberra Youth Theatre.

Hansen uses his music and cabaret as a platform for comedic activism. His 2017 cabaret "Airlock" was created in response to the homophobic claptrap that came out during the debate around Same-Sex Marriage, and he co-created "Schapelle Schapelle", a musical that examined the media's role in dehumanising Schapelle Corby during her imprisonment in Bali. He also performs solo cabaret with a satirical edge under his alter-ego, Tim Handsome.

In 2018 Hansen was a finalist in the Vanda and Young Songwriting competition, one of 40 shortlisted artists from over four thousand entries. Residencies include Artist in Residence at the Red Rattler Theatre, the New Musicals Australia program at the Hayes Theatre, composition fellow at the Bang on a Can Summer Institute, the Norfolk Contemporary Music Festival, the Avaloch New Music Institute, and twice artist-in-residence at Hill End, NSW.