With music and language, I tell the story. 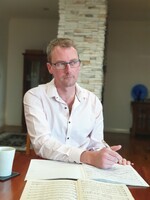 Sebastian Harris is a composer and bassoonist based in Albany, Western Australia with a passion for language, theatre and creating events. His works include chamber, orchestral and vocal works, particularly featuring woodwind.

Harris was born in Tasmania and grew up in Melbourne. He turned to composition as a teenager and completed studies at the Victorian College of the Arts in 2004. His development has also included mentorship under:

· Richard Gill for development of Motet for Orchestra, performed by Sydney Sinfonia

Other significant performances include the song Rockpool for Baritone, performed by José Carbó at Albany Entertainment Centre in 2019 and aria A Mother Reserves the Right, performed by soprano Jenna Robertson in the Brisbane Music Festival.

A family connection with the Top End established Aboriginal languages in his life from an early age, growing up referring to his grandparents in Yolngu-matha, the language of Arnhem Land community Milingimbi. During six years living in Katherine, aside from mounting an experimental chamber concert series, he spent a great deal of time exploring Aboriginal languages and culture across the NT. This experience is reflected in his works Nawalbinbin (2014), named after a place in Ngaliwurru country also known as Joe Creek, and The Catfish for solo clarinet (2021), which refers to both a Dagoman Aboriginal story from the Katherine area and Japanese culture.

Harris' composition themes tend to touch on taboo subjects, and he unashamedly bucks modern trends by writing in a semi-traditional style with tonal melodies and harmonies. Heedless of warnings, he writes most of his own lyrics and libretti. His tongue-in-cheek tango Silent Disapproval was premiered by Albany Chamber Orchestra in the Albany Arts Festival Season 2018. A long-standing family relationship and fascination with Japan lead him to spend 2019-2020 teaching at an isolated school in rural Hyogo Prefecture. This culminated in his choral song Snowflakes in the Sun, written for his students to sing following return to school after the COVID-19 pandemic lockdowns.

His latest project Albany Wind Festival was developed in partnership with one of the groups he works with, Albany City Wind Ensemble. The event celebrates Albany's vibrant music scene with a focus on woodwind music and featuring guest artists from West Australian Symphony Orchestra performing his compositions.