I believe in the synchronicity between music and every living thing around us. What we see and feel can be translated as music. Music has the power to make us laugh, cry or sing. When words are gone, music takes over. 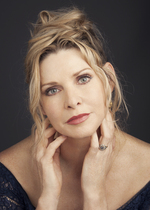 2017 also included a performance at New York's Carnegie (Weill Hall), a live concert on Echoes/NPR and accompanying Deepak Chopra, a concert for the Mason and Hamlin Piano Festival hosted by Hollywood Piano as well as the release of Into the Mist in the Sony Sponsored Hi-res Magic Bus which was a featured event at the Los Angeles Audio Show.

Additionally, Fiona's 2016 release Signature Synchronicity was nominated for Best Piano Album and Album of the Year in and global airplay ZMR Awards and in 2016 the album won two categories in the Independent Music Awards, a Finalist in the International Acoustic Music Awards, Hollywood Music in Media Awards and the USA Song-writing Competition.

Having tour China three times, Fiona Joy is nick-named 'the Piano Angel', not just for her romantic, melodic songs and lush arrangements, but also for her gracious and mesmerisingly ballet-like performance style in concert. A prolific composer, she has always been interested in creating music that evokes images, emotions and stories.

Her schedule for 2018 includes recording on the worlds first 108 key Stuart and Son's piano in Melbourne Australia, a tour with FLOW that will include a featured performance at the ZMR International Radio Awards Show in New Orleans as well as the West Coast of US.

It follows that her upbringing was filled with music. She recalls that her father embraced Andrew Lloyd Webber's music, playing Jesus in the Tamworth Musical Society production of Jesus Christ Superstar. Her classical piano training is evident in her thematic and melodic compositions. Ravel's Bolero emerged as an early influence, she says, adding, 'I loved it, I played it over and over and deconstructed every part. George Winston, Prokofiev and Mendelssohn also intrigued me'.

In 2015 Fiona contributed to a GRAMMY-winning album and traversed three continents, performing solo on a grand tour of China, entertaining in the U.S. at the ZMR Awards and at the audiophile Mecca, T.H.E. Show, closing out the year in Australia at the Sydney Women's International Jazz Festival with her renowned Blue Dream Ensemble. Once home, she attracted the national TV show Lateline, which ran a feature lifestyle piece on her life and music.

In 2014, a version of Fiona's song 'Grace' was chosen for a GRAMMY®-winning album that also reached #1 on the Billboard charts, and in 2013, her evocative piano and ethereal vocals earned her the global broadcaster's choice and honor as the Best Instrumental Piano Album for 600 Years in a Moment at the ZMR Awards, whose airplay charts she also graced at #1 for several months with Signature Solo. Fiona Joy also placed as Runner Up for Best Instrumental Song in the International Acoustic Music Awards, nominated alongside Pete Seeger for Best LIVE Performance Album in the Independent Music Awards, and she was an ARIA Finalist in Australia in 2008.

As a forward-looking artist, Fiona is interested in pioneering new musical concepts and recording techniques to better serve her highly-interactive fan base. She frequently appears at audiophile conferences, and is signed to Blue Coast Records for high-fidelity recordings; owner/producer Cookie Marenco is considered and leader in the field, partnering with Sony Music to deliver hi-res music to discerning audiophile consumers. Marenco says, 'Fiona's melodic solo piano and masterful performances are the perfect music to debut the kind of clarity double DSD audio brings to the home listener.  Her music is a cross of George Winston's simple melodies and Ludovico Einaudi's musical sophistication'.

'What I appreciated most was being able to listen and watch Fiona at the piano. The passion and elegance in her performance was breathtaking, as her flawless technique combined with pure emotional expression.'  (music reviewer Michael Diamond)

When not on the road, Fiona escapes to her peaceful home in a small rural village in Australia.