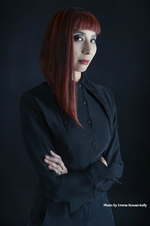 ​Me-Lee has worked as an additional composer on the feature film Penelepa, which won Best Fantasy Film at Amsterdam's Van Goph's Film festival and assistant composer to major Australian sci-fi features such as The Osiris Child: Science Fiction Volume 1 which have global distribution.

​In her youth, Me-Lee studied and trained in contemporary dance and ballet and hence has has a unique ability to appreciate the sensibilities of the requirements of dance and human movement and how this translates onto the stage. She has worked as a soundtrack designer for Sydney Dance Company (Pre-Professional year) and had performances presented at Short and Sweet Dance Festivals, staged at NIDA and Seymour Centre as well as being commissioned to compose music for a PhD Dance research project at WAAPA.

Me-Lee Hay is a graduate of the Australian Film Television & Radio School (AFTRS). With a training in classical piano (A.Mus.A), cello and theory, combined with electronica/pop explorations in the touring live band scene, Me-Lee is attracted to sounds of classical textures merging seamlessly with sounds and ambience of the modern world to facilitate a story, emotion and creation of worlds.