Our Art and Music defines us as a species. It is probably what an extraterrestrial civilisation would find most interesting about us. 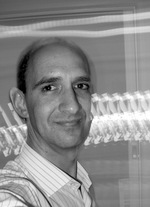 Nicholas Hender was born on 5 October 1973 in Melbourne. In 2002 he completed a Graduate Diploma in Education (Secondary) at Monash University, focusing on the teaching areas of music and physics. Prior to this, Hender completed a Bachelor of Arts with Honours, majoring in music, sub-majoring in physics, and specialising in computer music and composition, at La Trobe University in 1997.

In between studying at La Trobe and Monash Universities, Hender established his production studio, Terasonic. During this time he recorded and produced work for small-time songwriters and bands, and composed music for short film. To date, Hender has more than 60 works registered with APRA, and his original MP3 recordings have been accessed from his website in excess of 300,000 times. Hender currently teaches classroom music and senior level physics at Brentwood Secondary College in Melbourne.

Most of Hender's works are influenced by minimalist and serialist styles. He generally prefers to place musical emphasis on the variation of aspects other than melody and harmony. Hender is very interested in the conception and application of alternative tuning systems and the manipulation of timbre, and increasingly makes use of stochastic processes for structuring motivic material. His most recent works explore the expressive possibilities offered by Dynamic Tonality and Active Tuning. All Hender's works are realised by computer and published on the internet.