I feel fortunate to have been exposed to a few very open-minded and inspiring teachers who showed me that we are allowed to ignore the walls between different styles of writing and performing. 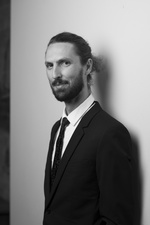 Rafael Karlen is a composer, saxophonist, arranger and director. He is a graduate of the Queensland Conservatorium of Music and from the University of York in England after receiving the Lord Mayor's Fellowship for Young and Emerging Artists. Rafael was the 2018 composer in residence at the the prestigious Peggy Glanville-Hicks House in Sydney.

Karlen's music has been performed by small jazz groups, rock and pop ensembles, big bands through to choirs, chamber orchestras and string quartets. He has performed throughout Australia, and in Canada, England, Scotland, New Zealand and Sweden and is currently releasing his fifth album featuring his original music.

In 2016 Rafael was a featured performer and composer with the Queensland Symphony Orchestra as part of the QSOCurrent Series where he composed, performed and directed his music for Chamber Orchestra, saxophone and piano.

Rafael has received many awards and accolades and in 2015 he was awarded a prestigious Winston Churchill Fellowship to travel to USA, England, Denmark, Norway, Germany and Holland to visit many of the world's leading contemporary composers/arrangers, performers and ensembles. He was recently awarded the prestigious Prelude Residency and is the 2018 Composer in Residence at the Peggy Glanville-Hicks House in Sydney allowing him to focus on producing new work over the course of 12 months.