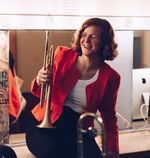 Ellen Kirkwood BMus(Hons, 1st Class) is a trumpeter, composer, bandleader and educator from Marrickville, Sydney. In 2012 she won the Jann Rutherford Memorial Award for young women in Jazz, and was the recipient of the 2019 NSW APRA Art Music Award for Jazz Excellence. She was a finalist in the 2017 Freedman Jazz Fellowships, and her suite for Big Band, "[A]part", was a finalist for Jazz Work of the Year in the 2018 APRA Art Music Awards.

As a trumpeter, Ellen has toured and recorded with a variety of successful ensembles, including Sirens Big Band, Mister Ott and On The Stoop, played with superstars Boy George and Hermitude, and performed at popular Australian festivals including Woodford Folk Festival, Sydney Festival and Melbourne International Jazz Festival. A 2016-17 mentorship with stellar composer/pianist Barney McAll, funded by the Australia Council for the Arts, led to the creation, recording and tour performances of [A]part; her 1-hour suite composed for Sirens Big Band plus guests Sandy Evans, Andrea Keller and Gian Slater. She has also released albums with her groups Captain Kirkwood and Fat Yahoozah, led the Mieville Project and Underwards, and co-led the Sydney Women's Jazz Collective. Her many commissioned works include pieces written for the New York-based Festival of New Trumpet Music, and the Sydney International Women's Jazz Festival. Since 2016 she has directed the Young Women's Jazz Orchestra; a project begun by Sirens Big Band to encourage and educate girls and young women towards careers in jazz.

"Ellen Kirkwood's music has that rare quality that characterises the music of the best composers: a truly unique, original voice that leaves you dying to hear the next piece." - Dr Sandy Evans, OAM

"Ellen Kirkwood is open to the new and her music sounds like that. Her sound cauldron bubbles with mystery, wit and beauty." - Barney McAll.