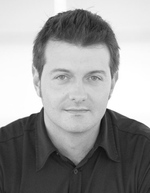 Anton Koch (composer, arranger and orchestrator) has extensive experience in live events, theatrical and concert performances, and film, television and recording projects, both within Australia and internationally.

Anton graduated in music (trumpet and composition) from the University of Queensland and performed with the Australian Youth Orchestra and the Queensland Symphony Orchestra (1990-1998) while establishing his career as a composer. In 2003, Anton won the inaugural Brian May Scholarship, enabling him to study scoring for film and television at the University of Southern California. Since then, he has earned credits on a plethora of projects including orchestrating the music of Hollywood composer Christopher Young, for the feature film The Exorcism of Emily Rose (2005), and additional orchestrations and arrangements of the music of Australian composer Elena Kats-Chernin, for the ABC TV opera The Divorce (Opera Australia, 2015).

In 2013, Anton won critical acclaim for his composition Theatre of the Horse, highlighting the opening of the outdoor amphitheatre at Royal Randwick Racecourse, and conducted the orchestra for Tony Hadley's (Spandau Ballet) Australian tour.