Extra-musical impetus ranges from humour to the tragic, kitsch to the high-order contemplative - all with the human condition as focal point. 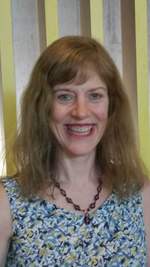 Linda Kouvaras is a Melbourne composer, musicologist, and pianist, on staff as Professor at the Melbourne Conservatorium of Music. She has not studied composition formally but co-wrote many songs in the Punk/New Wave band, Voxpop, with co-instigator Richard Ward (see Who's Who of Australian Rock!, Melbourne: Five Mile Press, 2002) during her "seven-year Easter break" from university studies in the early 1980s. She has benefited greatly from very generous feedback over the years, particularly that from Ward, Brenton Broadstock, Stuart Greenbaum, Richard Zatorski and Katy Abbott. Kouvaras has a proclivity toward text-setting, as well as writing for piano and for strings. Extra-musical catalysts incorporate a wide variety of subject matter; Inflight! (commissioned by the Australian Contemporary Chorale, 2004), for example, is a humorous work, underpinned by a sleazy blues-based bass. The far graver Anagnorisis (53 days) (2002) mixes neo-modal and minimalist soundworlds.

Recordings of Kouvaras's performances, compositions and liner notes for other composers appear on independent release, with Move Records, and with the ABC. At its release, her CD Kouvaras: Piano Works was CD of the Week on ABC Classic FM. The Sky is Melting by Rothschild-Riddle Duo (Move Records, 2014) includes her eponymously titled work for violin and piano as well as her Bundanon Sonata for Violin and Piano. Two songs from her first song cycle, Art & Life, appear on The Greek Muse (Athens: Indira Classics, 2021). Concert pianist and curator Coady Green is recording all of Kouvaras' chamber music in a 5-CD release with Toccata Classics (London), 2022-2023.

Kouvaras has enjoyed four artist-in-residence stays (1999, 2000, 2001, 2010) at the Arthur and Yvonne Boyd Estate, Bundanon, NSW. Festival performances of her works include the Composing Women's Festivals, the Melbourne Fringe Festival (2001), the Port Fairy Festival (2001 & 2002), and the Perth New Music Week (2001). Deviani Segal and Linda Thompson commissioned her to write Distant Lullaby for their CD of Australian lullabies, Repose, while Ian Holtham has recorded Secrets of the Amphitheatre on Giants in the Land. Kouvaras's The Sky is Melting (2000) and Bundanon Sonata for violin and piano (2011) are included on the CD The Sky is Melting (Move 2014).

Kouvaras publishes in contemporary music, both classical and popular, focusing especially on Australian music, postmodernism and gender issues in music. She was awarded an ARC Discovery Project Grant to research issues of postmodernism in contemporary Australian art music (2005-07). Linda is a Professor in Music at the Melbourne Conservatorium of Music, the University of Melbourne; she is a piano examiner for the Australian Music Examinations Board and was Senior Resident Tutor in Music and a Research Fellow at Ormond College 1993-2021.

Her book, Loading the Silence: Australian Sound Art in the Post-Digital Age (2013) is published by Ashgate (and Routledge, 2016). It won the IASPM-ANZ Rebecca Coyle publication prize in 2014. Kouvaras is co-editor (with Natalie Williams and Maria Grenfell) of two volumes on women composers, in-press with Palgrave Macmillan (forthcoming, 2022).

Kouvaras writes: "My composition practice explores various postmodern approaches, including incorporating popular-music styles, minimalism and neo-tonal/modal structures. Extra-musical impetus ranges from humour to the tragic, kitsch to the high-order contemplative -- all with the human condition as focal point."