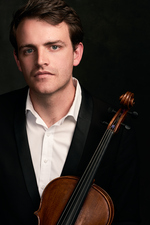 Matt has a varied career as a freelance composer and viola player currently based in Melbourne.

His music,"thought provoking and unusually beautiful", is fundamentally driven by an interest in story telling through sound, typically around themes of social connection and environment.

Matt has been writing music since he started university, sketching ideas whilst training to be a viola player, completing a Bachelor of Music/Bachelor of Commerce.

Following a successful participation in the Flinders Quartet's 2017 composer workshop, his first big commission Out of Hibernation was premiered by the Quartet in 2019 through which he was awarded an Ian Potter Cultural Trust grant to work on the quartet with mentoring from Brett Dean in London and Berlin.

Having participated in the Melbourne Symphony Orchestra's 2020 Young Composer program, he was subsequently selected as the Orchestra's Young Composer in Residence for 2021. Matt was awarded a Prelude Composer Residency for 2021 and is in residence at Collingrove Homestead, thanks to the Peggy Glanville-Hicks Composer House Trust and the South Australian National Trust. In July 2021 Matt was announced as a Musica Viva FutureMaker for 2021-23.

Matt's been a professional freelance viola player since 2012, playing regularly with the Melbourne Symphony Orchestra and Orchestra Victoria, and as a core member of the Melbourne Chamber Orchestra. He has also performed in the Australian Octet, and Melbourne-based ensembles Quartz, Rubiks and Arcko.