Llewellyn's music takes people into inner spaces to discover, to reflect and be moved. She invokes music's power and beauty to entice listeners into their own inner worlds. 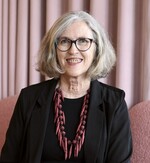 Becky Llewellyn is an Australian composer with wide-ranging interests and styles, always with lyricism at the heart of her music. A fully represented composer at the Australian Music Centre, Llewellyn has worked in major classical music genres for some of Australia's top musicians and is increasingly comfortable writing for non-professional musicians. Humour is a recurrent theme she enjoys exploring in-between more serious works.

Llewellyn migrated to Australia in 1969 and has made her home in Adelaide. She has been active in the disability rights movement through her first husband Richard Llewellyn's involvement and has worked for decades to make Adelaide Australia's most accessible city. She raised two step-children, two children and now shares in the joys of several grandchildren with her current husband, Marty Cielens.

In 1991, Llewellyn instigated the first Composing Women's Festival in Adelaide which went on to other cities throughout the '90s and formed a new awareness of women's talent in Australia. Her involvement is chronicled in Rosalind Appleby's Women of Note, the rise of Australian Women Composers. Llewellyn is has recently finished a commission for string quartet in tribute to her friend Ruth Prescott. Entitled Barossa Girl, the new work is 15 minutes with 4 movements exploring her life and strength facing an early death.

As a story-teller, she also employed her skills to critical acclaim as librettist for her chamber opera, The Portrait, a musical tribute to Stella Bowen. This was commissioned and toured in four states by Co-Opera. She has a BA Hons (Drama), studying with the legendary Wal Cherry at Flinders University Drama Centre and in composition with the equally legendary Graeme Koehne with whom she did her undergraduate and Masters of Music (Composition) study at the Elder Conservatorium of Music.

During 2020, she completed two sacred music works, Magnificat and Nunc , known as the St Nicolas Canticles and a cabaret-styled work for women's choir, In the Dark Times. This work was premiered in December 2020 with a Zoom presentation where the musicians, who had recorded their parts on iPhones and Becky heard the work put together for the first time. In April, the Icon Trio presented this as a live premiere. Both recordings are available on Becky's website.

In 2021, Becky has also completed a major commission for professional string quartet, a portrait of her friend Ruth Prescott who died in 2019. Barossa Girl is a powerful four-movement emotional journey through the stages of life, from girlhood to facing the end. Early listeners have found the work 'joyful, captivating and haunting'.

This year, Becky has harmonised and written words to a popular Ukrainian folk song to express the world's sorrow at the war the Ukranian people are enduring. Peace Prayer is her offering for a capella women's choirs to sing at faith-based services and peace vigils.

She has particularly enjoyed choral writing, including the mesmerising Whales Weep Not! for choir, marimba and percussion with the marimba maestro Ryszard Pusz. This work was enjoyed by a huge audience at Elder Hall in 2019 and takes listeners through an underwater excursion with whales. It has all the hallmarks of Llewellyn's empathy with a subject, turning it into a poetic meditation on voices, bells and what it is to be a mammal.

Llewellyn has composed music in 'the spaces between', a familiar story for women in the arts. A voracious reader in art, culture, politics, history and indigenous issues, her musical response is informed by an eclectic view of our place in time.