Music must communicate - it must say something of meaning that will engage each listener in a satisfying artistic journey. 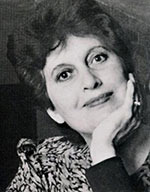 Born in the United States, Mary Mageau first arrived in Australia in 1974 as a guest music lecturer. She studied composition at Chicago's DePaul University gaining a BMus with Honours, and graduated from the University of Michigan, Ann Arbor, with a MMus degree in composition. In 1970 she also participated in the Tanglewood Composers' Fellowship Program.

Mageau received commissions from Musica Viva, the Queensland Philharmonic, the ABC, the Strathfield Symphony Orchestra and the Australia Council. Through Musica Viva's commissioning program, Italy's Trio di Milano and Hungary's Auer String Quartet have performed her chamber music. Soloists from the United States: Igor Kipnis, Audley Green, Janet Packer and the Adirondack Baroque Consort also commissioned her. International orchestras that have played and recorded her works include the Hartford, Duluth, Des Moines and Minnesota Orchestras in the USA, and Slovak and Polish Radio Symphony Orchestras in Europe. Her music has been released on 17 CDs.

From 2006, Mageau stopped accepting composer commissions, and pursued her interest in writing and nature photography. Her poetry in the Japanese verse forms of haiku, tanka and haibun has been published in the United States by Red Moon Press, the MET Press, Cli-Fi Books and Kei Books. Mageau's poems have also featured in American, Canadian and Australian anthologies and literary journals. In 2010 Blemish Books, (Canberra) published twenty of her haibun poems in Triptych Poets, Volume I. Mageau also wrote a collection of lyric essays on nature themes, four historical fiction novels and several collections of short stories.

Mageau wrote: 'Through my music I always seek to communicate something fresh, new and expressive to the performer/s and listening public. Music must communicate - it must say something of meaning that will engage each listener in a satisfying artistic journey'.

Book: A survey of the life and solo keyboard works of Mary Mageau / Margaret Joan Morley.