Once my mother told me she was concerned she didn’t understand my music. I told her just to enjoy listening. I try to write music for my mother, performers, and sophisticated musical listeners. If you’re finding the process of composition easy, you could probably make it better! 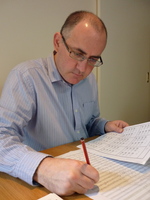 Vaughan McAlley briefly studied flute at the University of Melbourne with Prudence Davis before specialising in composition under Brenton Broadstock and musicology under John Griffiths and John O'Donnell. He spent many years playing in orchestras and developing a firm grasp of instrumentation and orchestration. Since joining the chamber choir Ensemble Gombert in 1999 he has developed a love of Renaissance music and has sung a large number of Renaissance works as well as editing a number of pieces himself.

Ensemble Gombert has performed Missa Cælestis in 2007, and Veritas de terra orta est in 2009, both recorded by ABC Classic FM. For his fortieth birthday party in 2010, Vaughan McAlley organised a performance of Tallis's Spem in alium, and presented the first section of his own forty-part motet, Omnes angeli. In October 2013, after two and a half years of composing, he presented the complete motet in the Dome at 333 Collins Street, performed by Ensemble Gombert and directed by John O'Donnell. Since he has become a father he has slowly composed a string quartet and a requiem.

Vaughan McAlley is the principal tenor at Scots Church in Melbourne, was happily married in 2007, has two excellent daughters, and enjoys saunas and computer programming.