If I had to describe myself in one word, it would be ‘melodist’ – soaring, lyrical melodies are the trademark of my work. 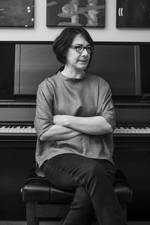 Genevieve Memory (formerly Ketels, b. 1969 Brisbane) is a composer, visual artist, curator and arts writer with a background in choral conducting, classroom music education and languages. She holds a Bachelor of Music (Music Education) from the University of Queensland (1990) and a Bachelor of Fine Art (Painting) with Distinction from Griffith University (2019).

As a newly qualified secondary school classroom music teacher, Genevieve looked first to the Dalcroze and then the Kodaly approaches to music education to enrich her pedagogy. She undertook a period of study at the Jacques Dalcroze Institute in Geneva, Switzerland (1992), and trained and later taught in the Kodaly-based Clayfield School of Music. This further training allowed Genevieve to teach from Preparatory to Year 12 at Clayfield College, St Peters Lutheran College and Brisbane Montessori School.

Genevieve began composing while at school and gave her first public performance of an original composition at age 15. Her university composition tutors included Colin Brumby, Robert Boughen and Philip Bracanin. At the Jacques Dalcroze Institute, she took classes in piano improvisation which complimented her more traditional Australian musical training.

Career highlights for Genevieve include winning the Melbourne Women's Choir Call for Scores with Sleep and Dreams (2003) and being commissioned to write the massed choir piece for the Victorian choral festival Come To The Music (2019). Genevieve's compositions have been performed around Australia by school and community groups, with Wishing for the Cloths of Heaven a favourite at weddings and Two Songs about Stradbroke Island/Minjerribah a popular eisteddfod choice.