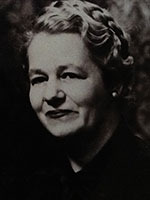 Meta Overman was born in Rotterdam into a musical family. Her own musical ability was obvious from an early age: she would place picture books on the piano and attempt to play what she could see. This ability to transform pictures into musical concepts and sounds is evident in all her compositions. She began piano lessons very early, firstly with her mother who was a professional teacher, and later with Johann Kievid. Overman's composition teachers included Eduard Flipse and, from 1937, Willem Pijper, perhaps the foremost Dutch teacher of composition of the twentieth century.

She survived two world wars in Holland, the Nazi occupation and almost total destruction of Rotterdam in 1940. In 1951, due to the shortage of housing after the war, she migrated to Australia to settle with relatives of her then husband, pianist Frank Russcher, with whom she had formed a successful piano duo. From 1951 to 1955, Overman lived in either Perth or Albany, WA, and wrote a number of pieces for choir, orchestra, ballet and piano. Her most important composition at that time was the opera Psyche which was written for the Festival of Perth and performed in the Sunken Garden at the University of Western Australia in 1955.

In 1957 Overman moved to Melbourne with her second husband Robert Hyner, who for some time was the part-time curator of the Percy Grainger Museum. In the time that Hyner and Overman worked together at the museum they transformed it into being more of a music centre with regular concerts and an electronic studio. During the period in Melbourne Overman was connected to other Melbourne-based composers including Margaret Sutherland, Dorian le Gallienne and Keith Humble, and had a number of her works performed by the ABC and other organisations: Suite of Old Dance Forms for orchestra (performed around Australia), The Image of the Cross (performed 1958 by the Oriana Madrigal Choir), Sonata for viola and piano, (performed by John Glickman, viola, and the composer) and Sonata II for piano, recorded for the ABC by Muriel Cohen.

There was a brief period of nine years between 1969 and 1978 when Overman returned to Holland due to ill health, but in 1978 she resettled in Perth where she remained until her death in October 1993.
All of her manuscripts, the beautifully hand-written - and in some cases illustrated - scores, many letters, reviews of concerts, newspaper articles, programs and other personal memorabilia are stored in the University of Western Australia music library.

Overman's mature composing life spans from 1939 to 1988. Her works cover many genres. There are seventeen works, or sets of works, for piano solo, five for orchestra, six sets of songs, five choral works, eleven operas including one three-act opera, four ballets and twenty-four chamber works, some of which are for two pianos. Unlike many of her contemporaries she did not work extensively as a piano teacher, which is why among her works there are no teaching pieces, books of studies or piano albums that occupied the time of many other composers who wrote for their students.

Her compositional style builds on foundations laid down by Willem Pijper, with whom she studied for approximately ten years. Her amalgamation of his early training with changing environmental influences and the use of an idiom made personal by her free approach to the language produces a complete but developing stylistic unity which was Meta Overman.

Book: Music of Meta Overman : The Queen of Colour and Fantasy / Jeanell Carrigan.