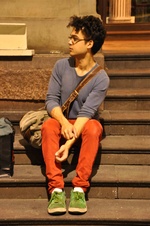 Luke Paulding (b. 1987) is swiftly emerging as a prominent voice in Australia's younger generation of composers. His music has been performed in the UK, Ireland, France, Italy, Singapore and across much of Australia, by musicians from ensembles such as ELISION Ensemble, Speak Percussion, Ensemble Linea (France), soundinitiative (France), Namascae Lemanic Modern Ensemble (France), ensemble interface (Germany), Quiver, 3 Shades Black, Kupka's Piano; as well as the Melbourne and Tasmanian Symphony Orchestras, with radio broadcasts on ABC Classic FM and 3MBS Fine Music.

Luke graduated from the Victorian College of the Arts in 2010, having attracted numerous awards, including the Marion Isobel Thomas Estate Award and Atheneum Prize. Through initial studies at the VCA and selective professional development programs around Australia and Europe (including the 2013 Nouvelle Voix composition course at Royaumont Abbey, France) his compositional mentors have included Brenton Broadstock, Chris Dench, Brian Ferneyhough, Liza Lim and David Young. He is currently undertaking a Master's degree in composition at the University of Melbourne with Elliott Gyger.