I make polyphony. I strive for beauty of purpose as well as of sound. 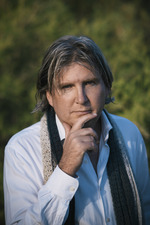 Formerly a Hampton Court Chapel Royal treble, New College Oxford Academic and Honorary Senior Scholar, Royal Academy of Music Senior Lecturer, and BBC Radio 3 Senior Producer, Antony Pitts's music has been performed at London's Wigmore Hall and Westminster Cathedral, Amsterdam's Concertgebouw, Berlin's Philharmonie Kammermusiksaal, and Sydney Opera House, as well as at more unusual venues and occasions such as Crossness Engines Pumping Station and the memorial events for former Soviet agent Alexander Litvinenko. Scores of his music are published by 1equalmusic and Faber Music - notably XL, the companion 40-part motet to Tallis's Spem in alium - and recordings of his music, including several complete albums, are available on Challenge Records, Delphian, Hyperion, Harmonia Mundi, Naxos, Novum, Signum, and Unknown Public. He also has a considerable output of radiophonic works and acoustic art commissioned by and broadcast on BBC Radio 3 and across the EBU.

He was commissioned by Klaus Heymann to create The Naxos Book of Carols, also published by Faber Music and circulated to millions of homes in the UK; his double-choir mass setting Missa Unitatis for the Dutch Illustre Lieve Vrouwe Broederschap was the first to be commissioned by the foundation for almost 500 years and was premiered complete and recorded in 2016 in the Netherlands under the direction of Stephen Layton and released on Challenge Records; his cantata for string quartet and traditional Arab ensemble - Who is my neighbour? - was the focus of an Aldeburgh residency at Snape, as well as a teaching week for Aldeburgh Young Musicians and workshops at the Al Kamandjâti music centre in Ramallah, and he conducted its premiere at the opening night of the Spitalfields Summer Festival; his oratorio-musical Jerusalem-Yerushalayim received a standing ovation both at its first performance in Northern Ireland and at its US premiere in May 2012, and a studio recording under his direction was remixed with narration by David Suchet and released in 2017.

Recent commissions include pieces for the Choir of New College, Oxford and an ensemble Antiphony for Syria, and he is now working with Adrian Self on a music theatre piece called The Process inspired by Kafka, starlings, and social media.