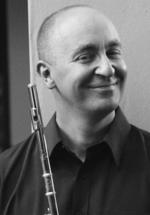 Michal Rosiak was born in Poland in 1977 and now lives in Brisbane, Australia. He received his graduate degree in music performance from Academy of Music in Katowice/Poland. A recent inductee into the Australian music scene, he has spent most of his career to date in Europe where he has won many accolades for his performance, compositions and teaching, as well as being principal flautist with Opole Philharmonic Orchestra in Poland, member of ESPRIT Flute Trio and a flute teacher in Chopin State School of Music in Opole.

At the age of 19, Rosiak performed his own composition Adagio & Scherzo for flute and orchestra with the Silesian Philharmonic Orchestra in Katowice/Poland.

He has also performed as a soloist with Capella Cracoviensis, Heidelberger Kammerorchester and Chamber Philharmonia Cologne.

In 2011 Rosiak composed Scenes from Childhood for clarinet ensemble. The piece was comissioned by the Riverina Conservatorium of Music in Wagga Wagga (NSW) and premiered by Clarinessance.

Since 2009 he has been cooperating with Fisenden Flute Ensemble, comissioning a number of compositions including Valse giocoso and Australian Suite - Great Barrier Reef.

As a result of above cooperations the following recordings have been produced: Telegraphed by Fisenden Flute Ensemble, containing Rosiak's Scherzo and Valse giocoso, and Monologues & Dialogues by Peter Sheridan, presenting Rosiak's Quasi Latino for low flutes quartet.

Michal Rosiak has arranged a number of compositions for the ANZAC concert performed by the Queensland Orchestra.

His music has been performed in Poland, Germany, Great Britain, Switzerland, Belgium, Russia, United States, New Zealand and Australia and has also been broadcast by ABC Classic Australia.