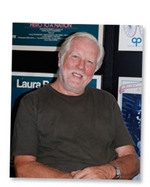 The oldest of three sons, Bruce Rowland was born into a very musical family - he, his parents and his brothers shared a passion for music, in particular musical theatre. Rowland, following the family tradition, studied piano and as a teenager played with various pop bands. Before long, Rowland had become one of Australia's most sought after session players and arrangers.

In the mid sixties Rowland wrote the music for children's television programs Magic Circle Club and Adventure Island. This was a demanding challenge for Rowland, who was expected to write 10 songs a week for 50 weeks of the year. Amazingly, he worked on the programs for five years.

In the seventies Rowland moved onto writing jingles for radio and television, producing over 2,000 jingles, many of which are still on air today.

The eighties started Rowland on some ambitious film projects, writing the scores for some of Australia's most successful films. His first film was The Man from Snowy River (1982), which saw the soundtrack achieve double platinum status and won Rowland his first AFI award. Following this tremendous success, Rowland then wrote the scores for Phar Lap (1983) and Rebel (1985) winning him a further two AFI's. Since then, Rowland has written the scores for over 40 films in Australia and the USA. He was honoured in 2006 with the APRA International Achievement Award for his work in film.

Along with film, Rowland has also worked on a variety of special projects. In 1988 he was commissioned to write the Royal Fanfare for the opening of "Expo 88". In 1996, he was commissioned to write the music for the Prime Minister's Olympic Dinner and then in 2000, Rowland wrote and conducted the music for the opening ceremony of the Sydney 2000 Olympic Games. The performance included a special rendition of his score for The Man from Snowy River.

In recent years Rowland has produced music for two Arena shows - Australian Outback Spectacular and The Man from Snowy River Arena Spectacular, with the latter scoring him an ARIA award in 2002. Rowland's other most recent project is short film The Mysterious Geographic Explorations of Jasper Morello, which was nominated for both an Academy Award and a BAFTA. Rowland's most recent musical score was for Australian film, The Cup, released in October 2011.

Biography provided by the composer — current to October 2011